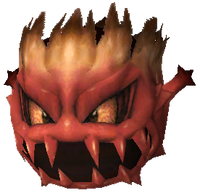 Bombs are enchanted explosives are named for the inanimate objects they most resemble. They are infamous for their habit of spontaneously exploding, which has led to the defeat of many an ill-prepared adventurer. However, some adventurers with pets, such as Beastmasters or Summoners, use this feature to their advantage by goading the bomb into exploding, damaging the pet but not the master, and simultaneously awarding the master a significant helping of experience.

Bombs are curious creatures, seemingly made from magic. They react to it, attacking adventurers who cast nearby, and also attack on sight. In most field areas, bombs usually only appear on foggy mornings. However, they also congregate in various ruins and dungeons. Bombs are particularly drawn to hot areas, such as Ifrit's Cauldron and Mount Zhayolm.

Bombs typically drop bomb arms and ash, although some have been known to drop keys. Additionally, bomb arms can be stolen from every bomb, including Notorious Monsters. The arms and ash can be used in a few recipes, but their supply usually outstrips demand.

The Bomb is made up of three stars visible in the Southern nighttime sky. According to Sand'Orian scriptures, Ramuh awakened the Bomb by striking a mountain with his lightning bolt, engulfing it in flame and bringing fire to the people. The gods were angered by this and summoned Leviathan from the Western ocean to douse the flames, killing the inhabitants. 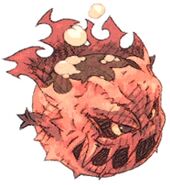