Boko is a chicobo (the term for a young chocobo used in Final Fantasy VIII) summoned using Gysahl Greens to battle. He is thus a pseudo-Guardian Force, but cannot be junctioned onto a party member like most others.

In the original versions, the player must level Boko up in the add-on game Chocobo World that was only available in Japan for the original PlayStation release, as it is played on a PocketStation. PC versions of Final Fantasy VIII include the game. Chocobo World is not available in Final Fantasy VIII Remastered, and thus Boko gets his powerful attacks in the normal game.

Boko is a young yellow chocobo with blue eyes, diminutive in size. He has a larger head and smaller wings in proportion to his body than the adult chocobos. A full sized chocobo stands at about 275 cm (9 foot) in height while a chicobo, depending on age, can be seen to be about 17 cm (6.7 inch) in height on up.

The player gets to name the chicobo when he is first offered to the party. His default name is Boko, but the player can change the name later with the Chocobo's Tag item, obtained from the Chocobo World minigame.

The first time the party goes to a chocobo forest and catches a chocobo, Chocoboy will offer them Boko, who will follow the mother chocobo when the player rides her on the world map. Boko can then be sent to Chocobo World to be leveled up. In Final Fantasy VIII Remastered, he stays in the main game as the Chocobo World add-on game is not available.

Squall and his friends can summon Boko into battle using Gysahl Greens. The player can get Gysahl Greens from ChocoBoy at the forests, or from the chicobo at the Chocobo Sanctuary after the quest is done.

Boko has four different attacks: ChocoFire, ChocoFlare, ChocoMeteor and ChocoBocle, each more powerful than the previous. In the original versions, to get the different attacks Boko must reach a certain level and trigger an event in Chocobo World, or the player must use a cheat device. In Final Fantasy VIII Remastered, he can use his powerful attacks in the main game, and which attack he uses depends on Squall's level.[1]

Boko, when summoned, can call Chubby Chocobo to attack enemies as his ultimate attack ChocoBocle. ChocoBocle is one of the few attacks in Final Fantasy VIII that can break damage limit.

Boko, along with friends Cactuar and Moomba, must rescue their friend MiniMog (a moogle) from the evil Demon King in Scary Mountain. During his adventures Boko must fight other monsters and overcome many perils, as well as fighting the urge to watch his television set and go fishing.

From when he reaches level 20, Boko meets a female chicobo named Koko who kisses him each time they meet. After each kiss, his powers will increase allowing for a stronger attack when summoned by the player party. When Boko reaches level 100, Demon King will capture Koko and Boko must fight him for her freedom. If Boko is leveled up to level 100 in Chocobo World in the Steam version, the player earns the trophy Top Level Boko.

Chicobo is a Level 8 GF Card in Triple Triad used for playing the minigame and for turning into Gysahl Greens with Quezacotl's Card Mod. Though all other GF cards are named after the GF's default name, Boko's card is simply called "Chicobo". The card is acquired after catching a chocobo in every forest and then visiting the Chocobo Sanctuary. The Chicobo card is required in the Queen of Cards sidequest to get the Chubby Chocobo card. 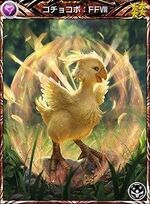 Boko has a card in the Final Fantasy Trading Card Game.

Boko summoned onto the battlefield.

In the English versions, the chicobo is named Boko, after the chocobo Bartz Klauser rode in Final Fantasy V, Boco. Boco comes from the last two syllables for the word "chocobo", "co" and "bo", which are put in reverse: "bo" and "co". [view · edit · purge]The name "chocobo" derives from a Japanese brand of chocolate malt ball by Morinaga, ChocoBall (チョコボール, Chokobōru?). The mascot for this product is Kyoro-chan (キョロちゃん?), a bird who says "kweh".

In the Japanese version of Final Fantasy VIII, the bird is simply called "Chicobo" (or "little chocobo"). This is what he is called on the Chocobo World story screens even in English. The Triple Triad card for him also calls him just "Chicobo".

In Chocobo World Boko's girlfriend is Koko. This is what the female chocobo Bartz's chocobo Boco mated with in Final Fantasy V is called.