Blue chocobo (青チョコボ, Ao Chokobo?) is a recurring type of chocobo. Appearing less commonly than other chocobo types, blue chocobos are able to cross rivers and streams. Blue chocobos are also known as River Chocobos for this trait.

Blue chocobos, known as River Chocobos, first appear in Final Fantasy VII, and along with the green chocobo are the first steps in the complex chain of breeding needed to get a gold chocobo.

Blue chocobos are bred from a good chocobo and a great chocobo with a Carob Nut, and can breed with a green chocobo to receive a black chocobo. Blue chocobos can cross shallow water and rivers, but cannot enter the ocean. Some NPCs in the chocobo races at the Gold Saucer may ride blue chocobos, but that doesn't give them any advantage in the race course.

A programming error reverses the abilities of blue and green colored chocobos. Green chocobos are unaffected in the space section of the short course as well as the water section of the long course, while blue chocobos climb hilly terrain easier. This can be seen easiest in the short course; given the same or comparable top speed, the blue chocobo will conquer the rising spiral at the beginning far more handily than a green or yellow chocobo. Black and gold chocobos are unaffected by both terrains and regular yellow chocobos, as well as all normal AI-controlled opponents, are slowed in both parts.

There are two types of blue chocobo: the light blue River Chocobo is Choco's first upgrade, found at the Healing Shore chocograph from the Chocobo Hot and Cold minigame. This allows Choco to traverse shallow waters and reefs from beaches, but he cannot traverse the open ocean. The dark blue Sea Chocobo can cross all water and is the penultimate upgrade for Choco, found at the Green Plains chocograph.

Blue chocobos of both shades can be found in Chocobo's Paradise.

Through chocobo raising, adventurers can breed and raise blue chocobos for use as personal mounts. The chocobo's color has no impact on the bird's attributes or abilities. Blue Chocobo Dye may be used to cause a player's chocobo to appear to be blue regardless of its actual color.

According to lore, the Palfrey breed of chocobo are sometimes born blue. These gentle chocobos are often used for desert travel.

Blue Chocobos can be recruited into the Paradigm Pack as Ravagers. They are some of the best Ravagers with some resistance to all elemental spells and massive attack potential. They are native to Archylte Steppe Year Unknown.

The player can dye their chocobo blue at Wiz Chocobo Post, but the effect is merely cosmetic.

A blue chocobo appears in the chocobo races in Gardenia. 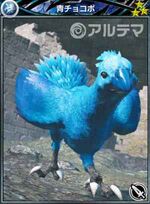