World map
The Blue Narciss is a sailing ship of the Regency of Lindblum in Final Fantasy IX. After the disappearance of the Mist which airships relied upon, as well as the failure of the unstable Hilda Garde II, Cid Fabool IX decides to make use of the Alexandrian Navy ship that the party has previously stolen to escape from the First Battle of the Iifa Tree.[1] This becomes the Blue Narciss. Queen Brahne's escape pod seen after her attack on the Iifa Tree is identical in appearance to the Blue Narciss.

The Blue Narciss uses two wing-like sails to travel through the sea, and is piloted by Blank. Regent Cid, now in the form of a frog, travels with Zidane. When Cid is finally returned to human form, he remodels the ship again to make the Hilda Garde III.

:Return to the deck

The Blue Narciss can only dock on beaches and the Alexandria and Lindblum harbors.

The Blue Narciss does not make an actual appearance, but its name is mentioned together with Lenna's name in a letter sent by "Kathy".

"For the one who sets off to destroy things when stuck, "Lenna" would be your perfect sister, kupo! The kind of princess can teach you about having a compassionate heart. Your lucky color of the day is "Blue Narciss," kupo!"

Concept art from The Art of Final Fantasy IX book. 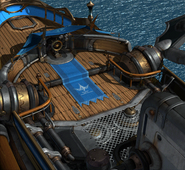 [view · edit · purge]In Greek mythology, Narcissus was a hunter from Thespiae in Boeotia known for his beauty and disdained those who loved him. Nemesis noticed this behavior and attracted Narcissus to a pool, where he saw his own reflection in the water and fell in love with it, not realizing it was merely an image. Unable to leave the beauty of his reflection, Narcissus lost his will to live. He stared at his reflection until he died. Narcissus is the origin of the term narcissism, a fixation with oneself and one's physical appearance or public perception. The word narcissus has come to be used for the daffodil.