Mages with the ability to learn monsters' special attacks.

The Blue Mage is a job in Final Fantasy V obtained after the Wind Crystal shatters. It is the first utility job in the game, providing both offensive and defensive capabilities. Unlike most other spellcasting jobs, Blue Mages can wield not only the common spellcaster equipment, but also swords and shields, giving them more offense and defense than a regular mage.

Their Strength and Magic Power are below that of a regular mage or fighter job. To use Blue Magic, Blue Mage must learn the spells from enemies during battle. Only one character needs to learn a Blue Magic spell for the rest of the party to use it.

Mastering Blue Mage for all four characters in the mobile and Steam versions earns the player the achievement "Learn from Monsters".

Blue Mages have a vaguely "superhero" look. Most of the costume is blue, with a cape and shoulder pads, a domino mask, and for Lenna and Krile, a feathered cap.

The Blue Mage's innate support ability, Learning, is what makes the Blue Mage unique. If one is going to hunt for Blue Magic, it is best to have a Beastmaster in the party. The Blue Mage doesn't need to live through the attack to learn it, so long as another member of the party finishes the battle alive.

Any job equipped with the Blue Magic ability will gain their character's base Freelancer Magic +23 if their default stat is lower.

Upon mastery, Freelancers and Mimes gain the Blue Mage's base Agility, Stamina and Magic unless they already have a higher base from another mastered job. They will also gain Learning as an innate support ability.

The job's innate command ability is Blue Magic, and its innate support ability is Learning, which allows the character to add spells to the Blue Magic skillset upon enemies using them. Both can be equipped on other jobs after leveling up as a Blue Mage.

The design for Bartz as a Blue Mage was likely inspired by the design of the scrapped Mystic Knight job from Final Fantasy III, which had the youths with tall spikey brown hair, a mask, and a cape with shoulder pads. [1] 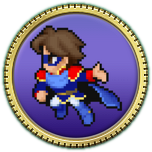