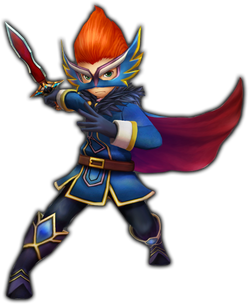 Blue Mages have a unique ability to learn and master techniques used by the enemy, allowing them to fulfill many different roles.

Blue Mage (青魔道士, Ao Madoushi?) is one of the jobs available in Final Fantasy Explorers.

It is unlocked by defeating 750 monsters. It can be mastered by completing any 10 quests, then the 5★ quest "Mastery Trials: Blue Mage".

The Blue Mage is a well-rounded tank, booster, debuffer and damager. They can initially equip daggers and staves; after mastery dual daggers, dual swords and artillery can be equipped.

They are proficient in all Blue Magic.