Blue Mages tend to dress in blue outfits with domino masks, in addition to wearing hats and capes of various designs, often with red highlights. Beyond this, Blue Mages vary in equipment and physical prowess. They are not as weak as other mage classes in terms of attack or defense, and are usually capable fighters. Of course, their true strength is their magic: Blue Magic, a special subset of magic that uses attacks otherwise exclusive to enemies.

Blue Mages often have a wide range of usefulness due to the varied spells they gain. Blue Mages usually learn Blue Magic by having enemies (or occasionally, another Blue Mage ally) use it on them, but some games have other methods to learn their magic. In some games, Blue Mages benefit greatly from the ability to control monsters allowing the player to manipulate monsters to use their skills on the Blue Mage. In some games, Blue Magic is a Limit Break command usable by particular characters.

The Blue Mage job class is obtained after the Wind Crystal shatters. Every party member learns the Blue Magic after any Blue Mage in the party is struck by a qualifying enemy ability; the Blue Mage does not need to survive the attack to learn it. The passive ability Learning lets the party acquire Blue Magic even when using other jobs.

Strago's job title was removed from the North American Super Nintendo version. Within the Final Fantasy III Nintendo Player's Guide, his job is given as Lore Master. The English Game Boy Advance version retained the job titles and Strago is a Blue Mage. He learns Lores by seeing enemies use an attack he can learn.

The Enemy Skill Materia functions like blue magic. If a character is hit with an enemy's special ability with this Materia equipped, they can learn it and use it via the "E. Skill" command.

Unlike other Command Materia, Enemy Skill cannot be mastered, and as such cannot spawn new ones. As such, there are only four in total in the game.

Quistis uses Blue Magic as her Limit Break. Her spells are learned from various items obtained from enemies.

Quina learns Blue Magic by eating certain weakened enemies. Most random encounters teach a spell if eaten, though many enemies tend to teach the same skill.

Kimahri, being a Ronso, will learn enemy abilities after using Lancet on enemies possessing said skills. The acquired Blue Magic spells can be used only during Kimahri's Overdrive, Ronso Rage. All Ronso are implied to be Blue Mages, as when the player fights a boss battle against certain Ronso, they also use Blue Magic, which Kimahri can even learn by using Lancet on them.

Blue Mage is an advanced job class, introduced in the Treasures of Aht Urhgan expansion. Their role is variable, and they are capable of dealing physical damage, magical damage, tanking, healing or providing support to parties, thanks to their ability to set certain monster abilities which modify their stats.

Within the story, Blue Magic comes from Aht Urhgan and is a magic type used by the Immortal Lionss. Using Blue Magic is said to endanger the souls of the casters, as they use powers not meant for mortals.

It allows the wearer to wield the peculiar magics of nature itself, and hastens the recovery of ATB.

Blue Mage appears as a garb for Lightning that allows her to use Lightning and Wind Slash, respectively (Thundara and Aeroga that deal physical damage). Lightning is unable to learn any monster skills when wearing this garb.

Blue Mage (BLU) is a "limited job" introduced in version 4.5 not associated with any class. Unlike regular jobs, Blue Mages cannot participate in regular duties by defaut or use the duty finder to join regular duties. Instead Blue Mages must enter dungeons and raids in pre-made parties. Blue Mages can only learn actions from enemies by witnessing their attack during combat. The chances of obtaining the action changes depending on party composition. To unlock the job, the player needs to be level 50 in at least one Disciple of War or Magic class.

Within the story, Blue Magic is a skill practiced in the New World only recently brought to Eorzea. The job features it's own side story with challenges known as the Masked Carnivale.

Blue Mage is a job exclusive to humes. Blue Mages wield sabers, and, in addition to the standard ability to learn monster abilities, can gain immunity to certain status ailments. They learn their abilities by being struck by the skill they are trying to learn.

Blue Mage is a job for the hume race which combines magickal abilities learned from monsters and the use of sabers to damage the enemy. To learn an ability, a Blue Mage must be successfully attacked by a monster with that ability while equipped with the support ability Learn (learned through the Light Saber).

In the Duel Colosseum, when selected, the Blue Mage job card increases the appearance rate of job cards.

The Blue Mage job card appears in the Labyrinth mode, and increases the appearance rate of job cards while in effect.

Casting Bad Breath causes prolonged nausea, but such is the blue mage's dedication.

The Blue Mage is a character available to the party. He uses the Missile ability during battle. It unlocks at level 14.

Currently the Blue Mage is not a playable character. However, the job's sprites can be found in the game's data.

Blue Mage is a the job unlocked after defeating 750 monsters. The Blue Mage is a well-rounded tank, booster, debuffer and damager.

For the third season of the game, Fina becomes a Blue Mage. Differently from the norm, Blue Magic is learned through story progression, rather than taking damage from specific enemy abilities.

The Blue Mage appears on a gold card.

The Vampire (ヴァンパイア, Vanpaia?) is an optional asterisk in Bravely Default that serves as the Blue Mage equivalent. It is obtained after defeating Lester DeRosso in the Vampire Castle. Like the Blue Mage, Vampire's can use a set of abilities known as "genome abilities", that allow them to use enemy skills after getting hit by them.

The Catmancer (ねこ使い, Nekotsukai?, lit. Cat Master) is an asterisk in Bravely Second: End Layer, that serves as a Blue Mage equivalent replacing the Vampire from the previous game. It is obtained after defeating Minette Napkatti in the Harena Sea Caves. Similar to Blue Mages, Catmancer's can learn two separate ability sets known as "Catmancy" and "Cat Mastery", after being hit by the enemy attack. Only one character needs to be hit to learn the attack.

Ringabel and Edea as Vampires in Bravely Default.

Magnolia as a Catmancer in Bravely Second: End Layer.

Gau's job in Final Fantasy VI is listed as "Feral Youth" and he is something of a mix of Blue Mage and Berserker, learning all of a monster's abilities (including passive abilities) in his Rage, but the player loses control of him and he will use his skills at random.

The Gun Mage (魔銃士, Majūshi?, lit. Magic Gunner) is a dressphere and is the Final Fantasy X-2 equivalent of a Blue Mage. Their Blue Bullet command lets them use enemies' skills once they have been used upon the Gun Mage character in battle.

Final Fantasy IV: The After Years has a dummied Blue Magic command belonging to an unknown character. It may have been planned for Harley as her equipment consists of mage-type weapons and armor, and she has high Intelligence.

Bartz from Final Fantasy V as a Blue Mage. 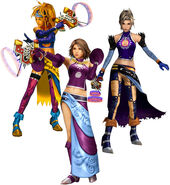 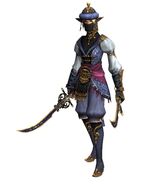 A hume Blue Mage in Final Fantasy Tactics A2: Grimoire of the Rift. 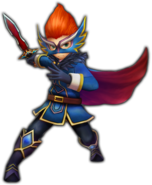