Cid Pollendina: Oh, shut up and help me remodel the Blue Fang (item) page!
Please expand this article into a full one. The following tasks need to be completed:

Tooth from a lightning-breathing dragon

The Blue Fang (あおいきば, Aoi Kiba?), also called Lit-Bolt and LitStorm, is a recurring item in the Final Fantasy series. It typically does either Lightning or Ice damage to enemies.

Cecil uses a Blue Fang in the opening sequence to kill a Zu. In the 3D versions, this is omitted. In the North American and Easy Type SNES releases, the item could not be obtained.

The Blue Fang deals Lightning-elemental damage to all enemies. They can be found in Palom's Challenge Dungeon and in the Subterrane of the True Moon.

The Blue Fang deals Ice-elemental damage to all enemies in range. Its effect is doubled when Pheasant Netsuke is equipped, as is with all Fang-type items. Blue Fangs can be found in chests, stolen from Baritine Crocs or dropped by Lizards.

In the Zodiac versions, it is called Rime Fang. 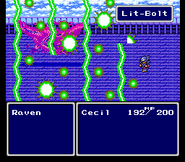 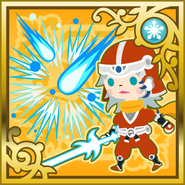 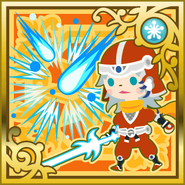 A lightning bolt is another name for lightning strike. [view · edit · purge]Lightning strikes are electrical discharges on a massive scale between the atmosphere and an earth-bound object.

A lightning storm is another name for thunderstorm. [view · edit · purge]A thunderstorm is a form of turbulent weather characterized by the presence of lightning and its acoustic effect on the Earth's atmosphere known as thunder. Thunderstorms occur in association with a type of cloud known as a cumulonimbus.