The Blue Dragon is an enemy in Final Fantasy VIII. It is a valuable enemy to fight for items needed for weapon remodeling. It uses status ailment moves.

A dragon that walks on 2 legs. Attacks with breath that causes status changes and drops a rare item called Fury Fragment.

The Blue Dragon's Grab Punch will always inflict critical damage. The Blue Dragon relies on status attacks, and is weak against Ice. They are susceptible to instant death.

Blue Dragons are a good source of AP to learn abilities fairly early.

It is possible to kill them by draw-casting Death from the monster itself. Junctioning 100 Deaths to Status Attack kills them in one hit.

Blue Dragon is a Level 4 Monster Card in Triple Triad used for playing the minigame and for turning into Fury Fragments with Quezacotl's Card Mod. They are worthy cards to collect as Fury Fragments can be made into the rare Aura spells. 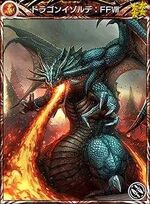 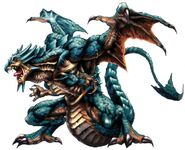 [view · edit · purge]Chromatic dragon is a classification of dragon in the role-playing game Dungeons & Dragons who are typically of evil alignment, in contrast to the metallic dragons, and their queen is Tiamat. White, black, green, blue and red dragons are the classic chromatic dragons. Final Fantasy has derived a lot of influence from D&D, especially the early series. Blue dragons are the second-most powerful of the classic chromatic dragons. They excel in aerial combat, discharge lightning, are powerful at spell craft and adept at burrowing in sand.