Delivers a threefold attack.
Cost: 16 MP
Cast: 0.5 s
Recast: 11.75 s
Bludgeon is a Blue Magic spell from Final Fantasy XI. It can be learned by Blue Mages at level 16, being one of the job's multi-hitting physical attack spells.

The spell can only be learned from Cardian enemies, which can only be found within the Outer Horutoto Ruins.

Bludgeon physically strikes one enemy three times, with the amount of damage varying on the user's TP. Due to its heavy damage potential at earlier levels, it is often one of the more popular spells to use during the early leveling process for the Blue Mage. When combined with Chain Affinity job ability, Bludgeon has the Skillchain property of Liquefaction.

It costs 2 Blue Magic Points to set and grants STR +1 stat bonus when equipped. Bludgeon can be combined with the Smite of Rage spell to create the Undead Killer Job Trait. It takes 0.5 seconds to cast and can be recast every 11.75 seconds.

Bludgeon appeared as a R and R+ type STR ability card for players to obtained. Being a common STR card, Bludgeon had a small damage potency, causing it to deal miniscule damage to enemies even when fully upgraded. 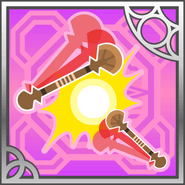 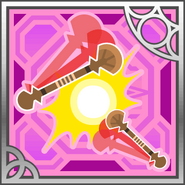