Nintendo DS
Blood of Bahamut is a title from Square Enix for the Nintendo DS. It was developed by Think & Feel, the team who last created Final Fantasy XII: Revenant Wings. As of yet there has been no reported connection to the earlier game, Bahamut Lagoon. Blood of Bahamut features real-time action, however, the developers urge that tactics and preparation are the keys to victory, rather than reflexes.

Blood of Bahamut is set in cities built upon sleeping giants. At the beginning of the game (or before the game) the giants awaken, and try to kill the residents living on them. The giants are references to the Summons from the Final Fantasy series.

Blood of Bahamut is a role-playing game in which up to four players battle giant beasts that are featured on both screens of the DS. It is also mission-based, with over 130 missions in total. In order to defeat a giant, players must first destroy its protective armor, then attack its "core", and finally attack its other body parts. The giants can summon smaller beasts, which the players must battle simultaneously. Defeating a giant's body parts and the smaller beasts will grant players "materials" which can be used to produce powerful weapons. 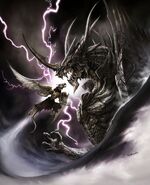 Concept art of the upgraded version of Gigant, called Gration, resembling the Knights of the Round summon.

The upgraded version of Ifrit, Beelzebub.

The upgraded version of Fenrir, Vanargand. 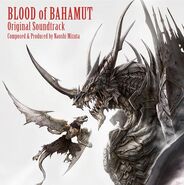 Artwork for the cover of the Blood of Bahamut Original Soundtrack.