Blood equipment (ブラッド, Buraddo?) is a recurring set of equipment in the Final Fantasy series, which most of the time focuses on draining the HP of its target and restoring the HP of the wielder, much like the Drain spell.

The Blood Sword makes its debut and provides no increase to base Attack or Accuracy, but each hit drains 1/16th of the target's max HP to heal the wielder. This makes the weapon extremely effective against enemies with high HP, however its drain effect is reversed when used against undead enemies.

The Blood Sword has an attack power of 55, and can be found in the Wrecked Ship.

The Blood Lance has an attack power of 95, and is found in the Temple of Time.

The Blood Lance is a lance that can be equipped by Kain that is found in Eblan Castle. It has an Attack Power of 88, but decreases accuracy by 28 and lowers Strength, Agility, Intelligence, Spirit, and Stamina by 10. It drains the HP of the target when they are attacked. If used on undead enemies the enemy will be healed and the user will take damage.

The Blood Lance is found in the Subterrane, and it has the same stats as it possessed in Final Fantasy IV. The Blood Harp is found within the game's code, a weapon for Edward that was removed from the final version. It cannot be equipped normally, requiring a direct hack to the game. It has the same effect as the other blood weapons, draining the target's HP.

The Hematic Shield is a dummied out shield that is found within the game's code. The Hematic Shield can be used if the player uses a cheating device to acquire it. This shield would have fit in neatly with the Bone Mail, Thornlet, and the Cursed Ring, as it shares the combination of having high stats but a status or HP-based drawback. It would have also shared its annoyance of being auto-equipped all the time.

The Blood Sword appears as a Shadow-elemental sword wielded by Steiner and teaches the Darkside ability. The Blood Sword has 24 Attack, and heals Steiner for the amount of damage dealt, though it damages Steiner and heals the enemy if he is fighting an undead. The sword can be stolen from Tiamat and earned from Queen Stella.

The Ensanguined Shield is the most powerful shield, requiring its own license worth 90 LP to equip. It has an Evade of 90, far above any other shield, but inflicts Sap, Slow and Poison on the user.

The Blood Lance is a weapon for Llyud that absorbs HP on hit. It has an Attack and Magick Attack of 80, and an attack speed of 40. It can be bought in the shop in Chapter 8 for 3,600 gil and also crafted through the Dragon's Devices Recipe Book.

The Blood Sword is a

Paladins. It is based on the weapons wielded by higher level succubus enemies. It can be purchased in Manderville Gold Saucer for 10,000 MGP, but it has no special properties and is largely intended for glamouring its appearance onto other weapons.

A harp with a rich timbre and wide tonal range.

The Bloodstring Harp has an attack power of 13, and cost 10000 gil. It can be bought in many Outfitters starting from Chapter 3. It acts the same way as the Blood Sword, it drains HP.

This harp can drain men's strength with its song.

It is said the blackened blood that coats this demon shield belonged to its former owners.

The Ensanguined Shield is the second most-powerful shield. It increases evasion by 15 and halves Dark-elemental damage, but bears a weakness to fire.

The Bloody Ring grants 10% of damage inflicted by a normal attack as HP. It is dropped from the Vampire Bat and Blood Bat.

The Blood Lance has an attack power of 101 and a hit rate of 20. It is Wind-elemental and drains the HP from enemies upon attacking.

Firion's EX Mode transforms his equipment into blood weapons, turning them all red, black and orange. As an effect of the weapons, Firion will be healed an equivalent amount of HP when he damages an opponent's HP.

The Ensanguined Shield is a level 99 shield that increases DEF by 73, lowers HP by 95% upon entering battle, and lowers initial Bravery by 100%.

The Ensanguined Shield is now a level 100 shield but has the same stats otherwise.

The Blood Lance is present as a weapon.

There are two pieces of blood equipment: Blood Sword and Blood Lance. 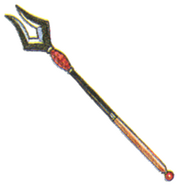 Ensanguined Shield in Final Fantasy Tactics A2: Grimoire of the Rift. 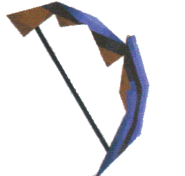 Bloody Bow in Final Fantasy: The 4 Heroes of Light. 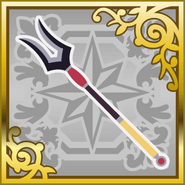 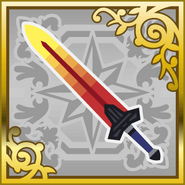 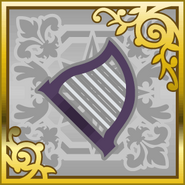 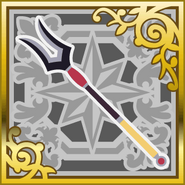 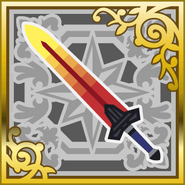 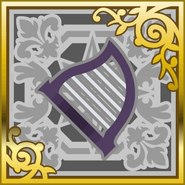 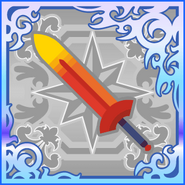 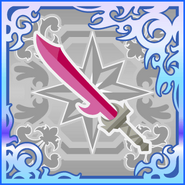 Blood Lance in Final Fantasy All the Bravest.

Blood Sword in Final Fantasy All the Bravest.