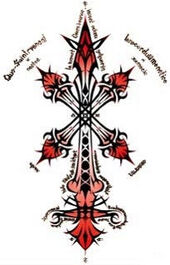 Only he who holds the Blood-Sin can succeed to the Dark city. The would-be successor must cede his phantom soul if he is to accept his prize—control of the Dark.

The Blood-Sin (血まみれの罪, Chimamire no tsumi?), also known as Rood Inverse, is a tattoo of great power in Vagrant Story.

The Blood-Sin, or Rood Inverse, is the inverted form of the Kildean Rood. In its Kildean form, it was born as a tattoo by the priestess Müllenkamp.

The Iocus priesthood also used the rood as their holy symbol. During the inquisitions led by the priesthood, they would brand heretics with the rood turned inverse (the "blade" facing down), and this symbol came to be known as the Blood-Sin.

Even after the destruction of Lea Monde, Mullenkamp's legacy lived on in the form of the "Key" to Lea Monde's power, granting control over the Dark. The Blood-Sin was the physical symbol of this key.

The Blood-Sin key to Lea Monde passed through the family of Duke Bardorba. Sydney Losstarot, the Duke's son, holds the Blood-Sin, his goal to pass it off to another who will not abuse its Dark powers. Both Jan Rosencrantz and Romeo Guildenstern desire the power of the Dark, and search for "the Key" not knowing it is the tattoo. Upon discovering this Guildenstern tears the tattoo off Sydney's back to obtain the power of Darkness, though he only bears it for a short time. In the end, both Rosencrantz and Guildenstern are dead, and the powers pass to Ashley Riot, a Riskbreaker with no love for the Dark. He becomes a vagrant, and never uses its power for evil.

The Blood-Sin is in the background when the player summons. It is signed by Gabranth in his first major appearance, and an identical Blood-Sin mark to the infamous tattoo from Vagrant Story appears on the skull of the shamaness during Zalera's spell "Death Wail". It also engraved onto the top half of the Shell Shield.

The cover of the Grimoire of the Rift tome may be intended to resemble the Blood-Sin.