A whip infused with electricity that can paralyze any foe it strikes. Though the shock whip is not powerful enough to send enemies soaring through the air, its ability to render them immobile can provide an advantage on the battlefield. However, it is important for owners to remember where to reach for this weapon on their person, lest they accidentally electrocute themselves. Equipping the shock whip also grants the wielder the power of thunder.

The Blitz Whip is a lightning-elemental whip exclusive to Rydia. It provides 40 Attack and 10 Accuracy. It can be purchased at the Feymarch for 10,000 gil.

The Blitz Whip is lightning-elemental and exclusive to Rydia. It is also her default weapon. It provides 40 Attack, 10 Accuracy, and has a 30% chance of inflicting Paralysis upon a successful hit.

The Blitz Whip is equippable by Rydia, Harley and Izayoi, and it is a lightning-elemental whip with the chance to inflict Paralysis. It provides 40 Attack, 10% Accuracy, and ignores Row. One can also be found in Edge's Challenge Dungeon.

The Blitz Whip can be equipped by Beastmasters, Freelancers, or any character with the Equip Whips ability. It has a 33% chance to cast Thunder upon a successful hit, and provides 39 Attack and 42 Hit Rate. It is a two-handed weapon and hits for full power from the back row. It can be can be found in Jachol Cave, and stolen from Flaremancers.

The weapon E-Whip has a sword icon before its name. It can be bought in Sky Town for 800 GP. It has 50 uses and an attack power of 70, the damage formula for E-Whip is base on Agility.

Blitz has a whip icon before its name. It can be bought for 6800 GP in Guardian's Town and Venus' City. It has 40 uses, it also increases a Robot's HP by 45 and increases their Agl by 10. The damage formula for Blitz is the user's Str x10, it also has a 60% chance of inflicting Para on one enemy for one round after the hit.

Blitz has a whip icon before its name. It has an attack power of 40, and has a chance of lowering the enemy's Magic. It gives cyborgs 60 HP when equipped. It can be bought in Elan in the Future for 1700 GP.

The Blitz Whip provides 18 Attack, 5 Hit Rate, and has a chance to inflict Paralysis upon a successful hit.

Shock Whip is a Whip obtained by crafting it using 180 gil, x3 Lightning Crysts, x3 Thickened Hides, x3 Iron Ores, and x1 Silver Ore. It provides 29 ATK, has a 15% chance of inflicting Paralyze, is Lightning-elemental, and gives access to the spell Thunder.

The Blitz Whip Final Fantasy IV (GBA/NES/PSX) and The After Years (Wii). 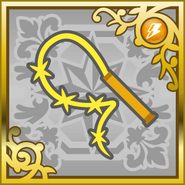 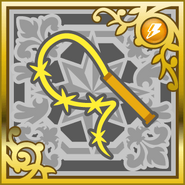