Blink (分身, Bunshin?), also known as Image and Mirror Image, is a recurring status that increases evasion. It can be applied either by the spell Blink, the armor Mirage Vest, or the item Decoy. The Ninjutsu spell Image also applies Blink to the entire party. There are no other ways to apply Blink, and it is an extremely rare status, as it has only appeared in a few games as opposed to several other well-known statuses such as Shell and Regen.

Applied by the White Magic spells Blink, Invis, and Invisira, the Blink status increases affected characters' evasion. The effect can be stacked.

The White Magic spell Blink can grant the Blink status. While affected by Blink, the number of attempts to evade an attack is increased. This does not affect the percentage chance to evade attacks. The effect can be stacked, but subsequent casts are less likely to succeed.

The White Magic spell Blink and Ninjutsu spell Mirage grants the target two blinking images called Blink (2). In the Advanced port, the Mist Dragon can grant Blink (1) on the party when summoned, but only after Rydia has completed her Lunar Trial and equipped herself with the Mist Ring. Blink (1) grants one blinking image.

A character with the Blink status can avoid the next two physical attacks under Blink (2) and one physical attack under Blink (1). Mirage will only target Edge, while Blink can be cast on anyone in the party, at a much lower cost than Mirage. Edge's weapon Mutsonokami can grant the Blink (2) status when used as an item during battle.

There are two versions of Blink. Both Blink (1) and Blink (2) are temporary statuses that wear off after battle, and can be removed by Dispel and Black Hole enemy ability. Both ignore priority and can be set even if higher-priority status effects, except KO or Petrify are already present.

Blink (2) can be granted by the Blink, the Ninjutsu's Mirage, and the Decoy item. Two flickering images appear behind the character with this status. A target under this status will avoid the next physical attack when targeted, then becomes Blink (1) is set. If the Barrier status was set previously, the Blink (2) status does not change.

Blink (1) can be granted by the Mist Dragon when Rydia is equipped with the Mist Ring and after losing one "image" from Blink (2). A target under this status will make all physical attacks automatically miss when targeted. One flickering image appear behind the character with this status. A target under this status will avoid the next physical attack when targeted, then the status will be removed. If the Barrier status was set previously, the Blink (1) status does not change.

The Blink status can be applied by several means including the use of the Blink spell, which can be cast by most White Magic users, such as Ceodore and Kain, use of Decoy and use of Edge's weapon Mutsonokami as an item. While in Blink status, two transparent images of the affected character will appear next to them. When physically attacked, they will automatically dodge, but an image will disappear. The status wears off after being attacked two times.

The armor Mirage Vest grants Blink at the start of the battle, but with one "image" instead of the usual two. Due to a bug, this can be refreshed by swapping weapons mid-battle. The Mix Kiss of Blessing also grants Blink status, though it also grants Berserk and Haste as well.

Characters with the Image status are immune to physical attacks, although unblockable attacks will hit. When they are physically attacked, there is a 25% chance the status will be dispelled. It can be applied via the Esper Fenrir, the Shadow Scroll, or by the Mirage Vest, which allows a character to start a battle with Image.

Blink is a White Magic spell that creates two shadow images that each have a chance to absorb a single physical attack until they both disappear. A superior effect can be achieved with the Ninjutsu spells, Utsusemi: Ichi and Utsusemi: Ni.

The Ninja spells are different in that they have a 100% chance of absorbing the next physical or single-target magic attack that the ninja does not dodge or parry (with some special exceptions), and the number of shadows produced: Utsusemi: Ichi produces three shadows, while Utsusemi: Ni produces four for main-job Ninja. However, Utsusemi: Ni will only produce three shadows for players using Ninja as their subjob.

The Ninja ability Utsusemi causes the character to dodge the next physical attack. This will trigger abilities which activate when an attack is dodged, such as Turn Tables.

The Rampart status allows the characters to avoid one physical attack. It can be obtained through the Holy Arts ability Rampart. 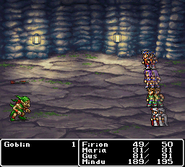