Blindna (ブラナ, Burana?), also known as LAMP or Wash is a White Magic spell that removes the Blind status.

Blindna (LAMP on the NES and Lamp in Final Fantasy Origins) is a level 2 White Magic spell which removes the Blind status effect from a single ally.

The spell can be bought at Pravoka and can be learned by the White Mage, White Wizard, Red Mage, Red Wizard, and Knight job classes. In the Dawn of Souls and 20th Anniversary Edition releases it costs 3 MP to cast.

Blindna (also called Wash) is a level 3 White Magic spell that can be bought in Northwest Saronia, Doga's Village, Falgabard, and Village of the Ancients for 1,500 gil. It can be used by White Mages, Red Mages, Scholars, Devouts, Sages, and in the NES version it can be used by Rangers and Magic Knights. It has a 75% accuracy and is the spell behind the Eye Drops item.

Blindna is a type of Healing Magic, and can be learned by White Mages and Scholars.

Blindna uses the White Magick 1 license unlocked for 15 LP. It costs 8 MP to cast and heals one unit of Blind status. The spell costs 200 gil to buy at Rabanastre after obtaining the Crescent Stone from Old Dalan.

In the Zodiac versions, Blindna is used by the White Mage. It also appears in the Trial Mode's Stage 5 in a treasure with the Diamond Armlet equipped. Penelo, Fran and Ashe join with the spell, and Larsa knows the spell when he joins as a guest.

Blindna is a level 1 White Magic. It cures blind for one target. It costs 4 MP to use. It can be bought in Caldisla, Yulyana Woods Needleworks, and Miasma Woods for 200 pg.

Blindna is a White Magic ability with a Rarity of ☆. It removes Blind from one target, it can initially be used four times and it can be honed to Rank 5. It can be created by using Minor White Orb x3, Minor Dark Orb x3 and 1000 gil. 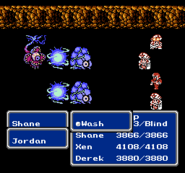