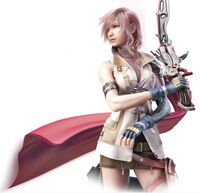 "Blinded By Light" (閃光, Senkō?, lit. Flash/Glint) is the main battle theme of Final Fantasy XIII and one of its most prominent tracks, its theme being a leitmotif for the main character Lightning. It was the first piece written for the game, created for the E3 debut trailer in 2006. It was composed by Masashi Hamauzu and arranged by Ryo Yamazaki.

Hamauzu wanted to create something with a catchy melody without being too straightforward. Unusual for a battle theme, it features violins as the main instrument accompanied by strong percussion.

The main melody and chords came to mind almost instantly, but I rearranged it many times. Originally the main melody phrase was 4/4 bars, but it seemed too repetitive even for chords and backing, so I decided to have 3/4 bars in order to add some things. On top of this, I asked Mr. Yamazaki to add a taste of rock music to it, and I don't think we could add such a sense of speed without him... I am so proud of my best buddy! I rearranged it so many times after that, but I could still not create something definite. When I brought a tune burnt on CD back home, my little daughter came to me saying "you should add a flute sound to it", thinking there were high tones missing in the tune that I created. Since then, I added a soft violin tone with an octave high to it and then it sounded like it worked perfectly. Also, I was originally considering adding a B-melody for further development to it, but thinking that gamers play hundreds and thousands of battles, I came to the decision it would be simpler to go straight into the climatic part. After all these twists and turns 'Blinded By Light' was born.

"Blinded By Light" is the most prominent battle theme with numerous arrangements. It is the first track of the second disc on the Final Fantasy XIII: Original Soundtrack.

Arrangements include the background theme of the introductory movie sequence "Defiers of Fate," which is later mixed into a battle theme for the Palamecia. "Defiers of Fate" is the fourth track of the soundtrack's first disc, while its mix is included in the Original Soundtrack PLUS album as the fifth track. The character theme of Lightning is a piano arrangement of "Blinded By Light," and is the tenth track of the second disc of the original soundtrack. "Yaschas Massif," the fifth track of the fourth disc of the soundtrack, is a bossa nova arrangement of "Blinded By Light" and serves as the background theme of the eponymous location.

The motif of "Blinded By Light" is included in "Forever Fugitives" and "To Hunt L'Cie," the fifteenth and eighteenth tracks of the second disc, which play during Snow's flashback of Serah's capture by Anima and the ambush at Palumpolum respectively; "Dust to Dust," the background theme of Oerba; the character theme of Fang; and its climax is included in "Determination," the theme for the ending cinematic.

"Blinded By Light" plays as the background theme in the Vile Peaks 200 AF and in the Serendipity slot machines when the player is in Victory Mode, and also as the battle theme for New Bodhum 700 AF. It also plays during the Beginner's Primer summary for Chapter 1.

The Final Fantasy XIII-2: Original Soundtrack also contains a quantity of new tracks that pay homage to "Blinded By Light."

Arrangements of "Blinded By Light" include Lightning's new personal theme, "Lightning's Theme ~Unprotected Future~," distinct from the original character theme due to its slower pace. It plays when she meets with Noel and her sister, Serah, at New Bodhum 700 AF, and later as the background theme. "Warrior Goddess," "Etro's Champion," and "Tears of the Goddess" use "Blinded By Light"'s structure, but the two latter tracks also use its pace and have distinct climaxes. "Warrior Goddess" plays during the first battle against Caius Ballad, while "Etro's Champion" plays during the first battle against Chaos Bahamut and as the battle theme for a Dying World 700 AF. "Tears of the Goddess" plays during the cutscene which shows Lightning's arrival in Valhalla and becoming Etro's protector.

"Divine Conflict," "An Arrow Through Time," "A World Without Cocoon," "A Fading Miracle," and "Etro's Gate" refer to or include parts "Blinded By Light's" motif. "Divine Conflict" plays during the scene where Lightning saves Noel in Valhalla and during the aerial fight against Chaos Bahamut, and "An Arrow Through Time" plays when Lightning asks Noel to find Serah and he leaps into the Time Gate. "A World Without Cocoon" plays in New Bodhum 3 AF when Serah meets Mog and learns that Noel met Lightning in Valhalla. "A Fading Miracle" plays during the cutscene in New Bodhum 700 AF, where Lightning tells Serah and Noel about Caius's plan to make Cocoon fall and turn the world into another Valhalla. "Etro's Gate" plays during the cutscene that shows Lightning's fate after the events of Final Fantasy XIII. All of these tracks were composed by Masashi Hamauzu.

The Final Fantasy XIII-2: Original Soundtrack PLUS contains a rearrangement of "Blinded by Light" titled "yuza_050", which plays when Noel, Serah, and Mog arrive in Valhalla.

Hamauzu named "Etro's Champion" his favorite piece from the soundtrack, because he had put a lot of thought into it; Hamauzu composed the track right after the 2011 Tōhoku earthquake and tsunami and in a meeting with the game's director, Motomu Toriyama, he had asked Hamauzu to write a battle song that would encourage the listener. Hamauzu had an idea flash in his head right then and there of a song in a major chord, with a chorus that involved a melody with half notes that sounded as if taking one step at a time to climb to the top.[1]

"Crimson Blitz," the song featured in various trailers, contains the vocal segment of "Blinded By Light" played during concerts of IMERUAT, with "Will to Fight" mixed into it. "Crimson Blitz" is composed by Masashi Hamauzu and was released on iTunes in promotion of the game. "The Savior" is another song modeled after "Blinded by Light" composed by Naoshi Mizuta with classical and electronic elements. Like "Crimson Blitz," "The Savior" was released on iTunes to promote the game. "Crimson Blitz" is the main battle theme of Luxerion, while "The Savior," called "Savior of Souls" on the soundtrack, is the main battle theme for the Wildlands.

The original "Blinded By Light" plays in Luxerion Cathedral's Altar of Atonement, during battle within certain areas inside the Temple Ruins and when battling Snow Villiers at the Patron's Palace.

"Blinded by Light" is used as a leitmotif throughout the soundtrack, as the composers wished to reinforce the game's emphasis on Lightning as a character.[2] An orchestral rendition of "Blinded by Light" appears during the credits, and samples of it are used in "Humanity's Tale," the theme for the ending cinematic. It makes a last appearance in "Credits ~ Light Eternal," where "Blinded by Light" plays directly after "Caius's Theme," and is the longest segment of the track. A reprise of "Blinded by Light" is heard in the mid-section of "The Doomed Soul -Caius and Yeul-" and in "Noel & Yeul ~The Promise~."

In the Lightning Returns: Final Fantasy XIII Retro-spective trailer, a 16-bit version of the theme appears.

The original version of "Blinded By Light" is used as a battle theme for all FATEs of the event Lightning Strikes, except the final battle against the Aspect of Chaos.

"Blinded by Light" is the fourth track of the Memories of FFXIII, which is available by default in the music player.

An arrangement of "Blinded by Light" by Mitsuto Suzuki is included as "Blinded By Light -arrange- from FINAL FANTASY XIII." It is the twelfth track of the game's original soundtrack second disc. It takes a lot of inspiration from "Defiers of Fate"

It is one of the default themes for battles against Lightning, or any battle with Orphan's Cradle as the arena. It is similar to "Defiers of Fate" from Final Fantasy XIII.

The Dissidia 012 arrangement is a default battle music. The Dissidia NT arrangement, as well as the original PlayStation 3 version, can be bought from the shop for 3,600 gil. The arrangement from Final Fantasy Record Keeper was available as a Dissidia Summer Festival Live bonus.

"Defiers of Fate" was selected as the Event Music Sequence for the Final Fantasy XIII Series Mode, and is also playable as a Battle Music Sequence exclusively as a Dark Note. This Dark Note can only be played at the Chaos Shrine mode. This theme also appears on the Theatrhythm Final Fantasy Compilation Album.

"Blinded by Light," "Defiers of Fate," and "Etro's Champion" is Battle Music Sequences, while "Crimson Blitz" is introduced as a BMS for Lightning Returns: Final Fantasy XIII. All songs are available in the base game. "Crimson Blitz" also appears on the Best of Theatrhythm Final Fantasy Curtain Call album.

"Blinded by Light" is a playable Battle Music Sequence. It is available to the player by default.

The Final Fantasy Record Keeper arrangement of "Blinded by Light" is also playable as a Battle Music Sequence. It is available to the player by default.

"Blinded By Light" incorrectly plays in a select few Final Fantasy V and Final Fantasy VI Core Dungeons instead of the music associated with the aforementioned games.

A new arrangement called "Prismelody: Blinded by Light" plays when using Lightning's Champion Medal. It takes some elements from "Crimson Blitz" and "The Savior".

The lead movement of "Blinded By Light" plays rapidly as the "Lightning: FFXIII" card is invoked. This card was offered as part of the Lightning Resurrection Challenge and carries the Thunderfall ability, which for 3-4 Wind orbs unleashes multiple concurrent hits against one target.

The theme appears in the 8-bit arrangement album featuring tracks from several Square Enix games. It is the third track in the album.

"Blinded By Light" is the thirteenth song of the final track of this album, "Battle Medley 2012 (Final Fantasy I – XIV)," arranged by Hiroyuki Nakayama.

An orchestral arrangement of "Blinded by Light" conducted by Arnie Roth and performed by the Kanagawa Philharmonic Orchestra is present on the third Distant Worlds album. It was originally performed in Tokyo in November 2010. It was the sixteenth song of the concert's line-up and is the fifth track of the second disc of the concert's recording.

A live recording of "The Promise - Blinded By Light" from at the London premiere of the concert of the same name on February 15, 2014, conducted by Arnie Roth, is included on this album.

A concert recording of "Blinded By Light" appears on this album.

IMERUAT, a music group founded by Masashi Hamauzu and Mina Sakai, performs a vocal arrangement of "Blinded By Light" during their concerts.

"Blinded By Light" was included on the European Collectors Edition of Final Fantasy XIII.

"Blinded By Light" was also included in this "best of" type vinyl album. It is the third track of Side B.

"Yaschas Massif" was included in this "best of" type vinyl album. It is the third track of Side B.

A sidequest in Final Fantasy XV: Episode Prompto is called "Blinded by White."