Those who serve the gods are forbidden from using pointed, sharp weapons such as swords, lances, and even bows. For this very reason, they opt for this hammer instead to defend themselves and their temples from danger. Although originally intended to be used for self-defense only, a single blow from this blessed weapon can cause a massive amount of damage. However, unlike most hammers of its kind, its design has a graceful and polished finish.

Blessed Hammer (ブレスドハンマー, Buresudohanmaa?) is a recurring weapon in the series.

Blessed Hammer is the second strongest hammer, trumped by the Mighty Hammer, providing 120 Attack, +3 Vitality, and is Lightning-elemental. It can be found in Falgabard and the Falgabard Cave, and is exclusive to the 3D versions. It can only be equipped by the Onion Knight and Viking jobs.

Blessed Hammer is a club that provides 27 damage, 324 delay, MP +10, and MND +2. It deals 5 damage per second and accumulates 84 TP per hit. It can be equipped by level 41 White Mage. It can be obtained from the "Messenger from Beyond" quest.

Blessed Hamemr is a hammer that provides 44 ATK, 6 MAG, and 28 SPR. It is crafted using 1,020 gil, Light Cryst x5, Light Megacryst x10, Mythril Ore x12, and Silver Ore x7, and obtained by finding and turning in the Gale Key from Aquapolis Olderion. 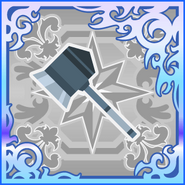 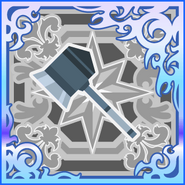