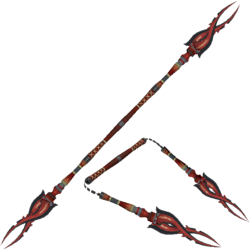 This weapon is used for hunting as well as traditional martial arts.

Bladed Lance is Fang's initial weapon, grade C equipment piece, and can be bought at Up In Arms retail network shop for 4,500 gil. At level 1 it raises Fang's Strength by 55 and Magic by 35, and at the maximum level of 16 it raises Strength by 130 and Magic by 85, and it belongs to the ability synthesis group Physical Defense. At the max level it can be dismantled into Shattered Bone x13 and Enigmatic Fluid x1.

While not featured as an actual weapon, Bladed Lance is used by Fang to create an exit for Serah to leave her dream world.

Fang's favorite weapon, nicked and scarred thanks to the wild fighting style of Gran Pulse.

The Bladed Lance is a spear available to Lightning, after completing the "Last One Standing" quest in the Dead Dunes. In its raw form it raises Lightning's Strength and Magic by 680 points, raises Stagger Power by 15%, comes with Overclocking Manual which extends the duration of Overclock, and provides Jump auto-ability. On Hard Mode when upgrading equipment becomes available, Bladed Lance's capabilities can be improved: maximum Strength and Magic boost can reach 2,200 points, Stagger Power can be improved to up +20% increase, Overclocking Manual can receive Overclocking Manual+ upgrade.

As Fang returns as a guest character, she retains Bladed Lance and uses it during battles.

The Bladed Lance is a lancer's arm that can be used by lancers and dragoons. It could be obtained via the event Lightning Strikes, or otherwise purchased on the Mog Station.

Bladed Lance appears as a weapon.

Bladed Lance is wielded by Fang in one of her sprites. 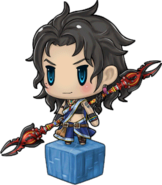 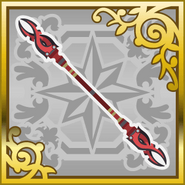 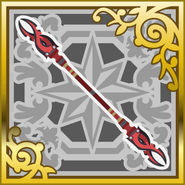