Blade of the Mystic

A king rose to protect the world with the Oracle. This was his sword. When swung, it enhances the wielders prowess.

Blade of the Mystic (夜叉王の刀剣, Yasha'ō no Tōken?, lit. Sword of the Yaksha King) is the signature weapon of Somnus Lucis Caelum, also known as the Founder King or the Mystic, from the Final Fantasy XV Universe. It is Somnus's weapon in all his appearances, as well as a royal arm for the player in Final Fantasy XV. It is a platinum-colored longsword with a wing ornament at the hilt and a decorated blade. The blade performs a unique warp-strike.

One half of a pair, Somnus's beloved Blade of the Mystic was forged alongside the Rakshasa Blade, the blade of his elder brother Ardyn. Both blades possess different properties, supposedly forming a destructive arsenal when wielded together. The Blade of the Mystic is platinum, whereas the Rakshasa Blade is red, but they mirror one another in ability. Ardyn and Somnus's parents bestowed the swords to their sons in the hope they would rule together, but envy and ambition tore the two apart after their parents passed. As a special trait of the Lucis Caelum bloodline, the brothers could manifest their weapons from thin air for use when needed.

In many people's eyes Ardyn was the favored brother to become the first king of Lucis due to his compassionate nature, but Somnus envied his popularity and disagreed with Ardyn's methods of curing people from the Starscourge malady by taking on the affliction into his own body. As depicted in Final Fantasy XV: Episode Ardyn – Prologue, Ardyn was summoned to the tower where the sacred Crystal was kept and was attacked by Somnus, who declared himself as the rightful king and Ardyn a monstrous traitor. The brothers drew their blades against one another, and Ardyn's fiancée, Aera Mirus Fleuret, was accidentally killed by Somnus wielding the Blade of the Mystic when she interfered. Somnus ultimately killed Ardyn by warp-striking him with a spear, but upon discovering his brother had become immortal, Ardyn was chained in Angelgard for the next two millennia.

Somnus ascended the throne of Lucis as its Founder King and became known as the Mystic. He enshrined the Blade of the Mystic to a royal tomb that would end up at the Disc of Cauthess for the fabled True King, prophesied to be born of his bloodline in the future, to one day wield. Statues of Somnus were erected displaying his visage with the famous blade.

After two millennia of captivity Ardyn is released from his prison and brought to Niflheim, an empire ever at war with Lucis. Ardyn begins to plot for the demise of Somnus's descendants, and as depicted in Final Fantasy XV: Episode Ardyn, infiltrates the metropolis of Insomnia during the Founder King's Day festivities. After defeating the current king, Regis Lucis Caelum, the monarch's Ring of the Lucii summons Somnus's soul and activates a colossal statue likeness of him that wields a massive version of the Blade of the Mystic. Though Ardyn bests his brother, his revenge is ultimately denied when Bahamut removes him from Insomnia.

Over twenty years later Niflheim finally invades Insomnia. As depicted in Kingsglaive: Final Fantasy XV, Regis is killed and the Ring of the Lucii ends up in the possession of Nyx Ulric, one of the king's loyal soldiers. He gains the power to animate the Old Wall with it. The statue of the Mystic wields a colossal version of the Blade of the Mystic in his battle against imperial Diamond Weapons. The blade breaks in the final stretch of the battle, and thus he tosses it aside and punches the Weapon instead. The Old Wall and Nyx triumph over the imperial weapons and General Glauca, but the Crystal is stolen and Insomnia is occupied.

Regis's son, Noctis Lucis Caelum, as the Chosen King of legend, embarks on a quest to collect the royal arms of his forebears to restore his kingdom. When the Astral god Titan summons him to the Disc of Cauthess, Noctis comes across the Tomb of the Mystic and inherits the Blade of the Mystic. It becomes one of his favored royal arms, commonly choosing it when performing actions that require a royal weapon. When entering Armiger, he wields it alongside the other royal arms he has collected.

Ardyn meanwhile continues on his journey of revenge, his plan to kill Noctis at the height of his power as the True King. Ardyn seems to wield the same royal arms in Armiger Noctis can collect, although whether his version of the blade is his original Rakshasa Blade rather than the Blade of the Mystic is unknown.

In the Final Fantasy XV -The Dawn of the Future-, it is Ardyn who sits upon the throne and the Mystic is the one to deliver the final blow with his blade, and the Lucii combine their powers to take on Bahamut in the realm beyond.

The Blade of the Mystic is the fourth royal arm obtained during the main quest. It is found at the Disc of Cauthess in Chapter 4. Noctis can also unlock the sword in Close Encounter of the Terra Kind by delivering items to the Hiso Aliens. It is a longsword that boosts the wielder's Strength through a unique self-buff. It was once the property of the Mystic, the first Lucian king.

Its basic combo has Noctis perform myriad slashes and stabs at medium speed and area of effect. When the player stops attacking, Noctis will hold the sword in front of him and gain +100 Strength for 10 seconds. This buff can be activated outside of combat. The blade's aerial attack is a single slash, and its phase-counter is an uppercut slash.

Warp-striking with the Blade of the Mystic has Noctis shoot Armiger projections before delivering the strike, a strong direct downwards slash. Each projection does the same damage as the blade would in a melee hit adjusted for warp-strike distance bonus. Only the strike itself will drain HP. Due to the focused nature of the physical strike, it is good for breaking normally hard-to-reach appendages.

Noctis displays a preference for this weapon after obtaining it, as he uses it the most whenever he executes an attack that requires a royal arm. The blade is well balanced and a good addition to any arsenal. Its multi-hit warp-strike is mirrored by the Mutant Rakshasa Blade added as reward for completing Final Fantasy XV: Episode Ardyn; the Mutant Rakshasa Blade has more all-around stat boosts and does not drain HP on use, but uses normal greatsword combos and deals slightly weaker net damage. The warp-strike itself deals neutral damage, regardless of the target's greatsword affinity.

The Mystic statue of the Old Wall in Insomnia wields a giant version of the longsword in Kingsglaive: Final Fantasy XV. In Final Fantasy XV: Episode Ardyn – Prologue, Somnus conjures a blade that may be intended to be the Blade of the Mystic, although it lacks the wing ornamentation and is shorter.

During Armiger Chain, Noctis wields the Blade of the Mystic during the first wave of attacks. Noctis can also unlock the sword in Close Encounter of the Terra Kind by delivering items to the Hiso Aliens.

Noctis wields the Blade of the Mystic against a behemoth.

The weapon is available in Final Fantasy Record Keeper. 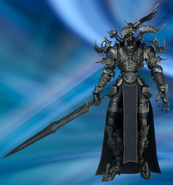 The Mystic with his blade.

The name is in juxtaposition to Ardyn's Rakshasa Blade, although the connection is not apparent in the English localization. In Japanese, Somnus's Lucii is known "the Yaksha King"; Yaksha is a class of nature-spirits, usually benevolent, who take care of the natural treasures hidden in the earth and tree roots in Hindu, Jain and Buddhist texts. The Yakshas are described in Hindu literature as the brothers of Rakshasas.