Shout (depending on use)
Blade Beam is Cloud's first level 2 Limit in Final Fantasy VII. It is an attack that strikes at a target for 3.5 times Cloud's base physical damage, and then hits other enemies with shockwaves dealing approximately Cloud's normal damage. Using it seven times unlocks Climhazzard.

Blade Beam is performed by Cloud swinging his sword down, at which point a green light beam fires directly from the blade towards an enemy, leaving a rippling effect. After the enemy deals damage, shockwaves then hit the adjacent enemies.

Blade Beam is obtained by killing 120 enemies with Cloud. Early on, this can be sped up using the Enemy Skill Materia, particular if Matra Magic has been learned. Matra Magic deals typeless magic damage to all enemies for only 8 MP, allowing Cloud to quickly kill waves of enemies in the Grasslands Area, in the Mythril Mine, or in the forests of the Junon Area. Later on, the large forest in the Nibel Area past Mt. Nibel features a wave of six enemies (Battery Cap) to be killed, and overall has around 4.4 enemies per encounter.

Blade Beam deals damage at 3.5 times Cloud's normal physical damage, and then hits nearby enemies with a shockwave dealing damage close to Cloud's normal damage. This means it is best targeted at the largest target, or the target with the most HP, as the splash damage will hit smaller targets. Blade Beam relies on Cloud's physical stats, meaning its damage is based on Cloud's Strength stat and his currently equipped weapon.

Depending on if there is a single enemy or multiple when Blade Beam used, it behaves differently. The diffusing waves of the multi-attack version are the only Shout-elemental attack the player can use. If there is only one target Blade Beam is, surprisingly, considered a magical attack, even if its damage and accuracy are still calculated from physical stats. The only way to see this is when the target reacts differently whether the attack is physical or magical (i.e. if an enemy always counters magical attacks, they will treat Blade Beam as one). This is clear with Lost Number, since he will transform to his magical form after being hit by Blade Beam, but many other enemies also have a counter-attack they use when hit by a magic attack.

After using Blade Beam seven times, Cloud obtains his second 2 Limit Break, Climhazzard. Climhazzard deals more damage to a single target than Blade Beam, but does not have splash damage. This means Blade Beam remains useful against groups of enemies, while Climhazzard should be used on larger single targets and bosses.

Blade Beam is eventually outclassed by Cloud's level 3 Limit Breaks, as Meteorain and Finishing Touch both deal damage to all enemies, but the damage is never reduced and will hit all targets for the same amount. Though Meteorain is less reliable than Blade Beam, its damage output is nonetheless higher overall, and is worth the tradeoff of Cloud's Limit charging slower. 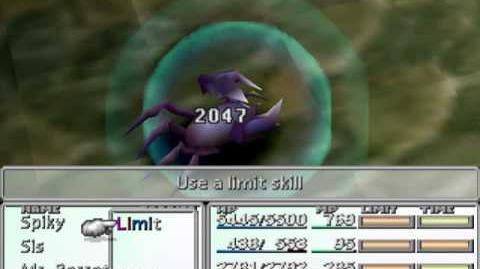