Ours is a trade born o' blood and brine. Fer as long as pirates have sailed the Rhotano, smitties have forged their weapons and fitted out their ships from keel to cannon.

The Blacksmith is a Disciple of the Hand in Final Fantasy XIV.

It is in the fires and on the anvils of blacksmiths that weapons and tools of metal are crafted. Their work is in demand far and wide, whether it be hammering the blade of a sword at the forge, or whetting the edge of an axe at camp. Limsa Lominsa has been renowned for its blacksmithing tradition since antiquity, though the advanced metallurgical techniques passed on today bear little resemblance to the simple practices of ancient times. The relatively recent birth of firearms has created an entirely new area of expertise which is being adopted with fervor by many ambitious smiths.

Blacksmiths can construct metallic arms and tools used by almost all of the classes in the game (including themselves). Being metallurgists, they can also smelt ingots and shape them into components used by other Disciples of the Hand.

Blacksmiths use hammers as their primary tool and files as their secondary. Their armor is primarily made up of "Crafting" gear that they share with other disciples of the hand. Crafting gear provides bonuses to the craftsmanship, control, and CP attributes. Craftsmanship and control respectively improve their progress and quality gains when crafting. CP is the resource they use in place of MP for their abilities.

Soul of the Blacksmith is equipped.

The Blacksmith appears with a Fire-elemental card. 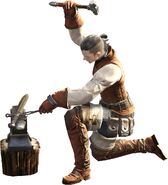