I can't believe this clunky old thing can fly... You sure it'll stay in the air?

The Blackjack is an airship in Final Fantasy VI. It is one of two airships in the world, the other being the Falcon. The Blackjack marks a notable design change from the airships of previous games. While previous craft were simply flying ships with propellers and wings, the Blackjack resembles an airship in the real-world definition; that is, a powered lighter-than-air vessel.

Via the airship glitch the player can gain access to the Blackjack earlier than intended.

Setzer Gabbiani, the owner of the airship, raced Blackjack around the world against his girlfriend Darill, the owner of the Falcon. The Falcon proved the faster ship, but Darill crashed and perished while racing it. It isn't specified if this was its original purpose, but the Blackjack was a flying casino with an item shop and a healer making their services available.

The Returners contact Setzer because they need the Blackjack to get to the southern continent, to the imperial capital Vector. Celes challenges Setzer to bet his allegiance and use of the ship on a coin toss—if she won he'd help the Returners, but if she lost she'd marry him. Using a two-headed coin from Edgar, Celes wins and the Blackjack falls to the Returners.

Setzer waits on-board near Albrook while the Returners raid the Magitek Research Facility to free the imprisoned espers. Setzer flies to Vector to rescue them, and the party fights off the Cranes to escape Vector airspace. After this, the party is free to use the Blackjack to travel the world.

When Terra pleads to the espers for help at the Sealed Gate, the espers attack the Blackjack and the ship crashes near Maranda. Cid Del Norte Marguez helps Setzer repair it, after which Setzer flies it to Thamasa to warn the group the empire's supposed ceasefire is a lie. The airship is used to attack the Floating Continent, and during the cataclysm, the Returners leap off the continent onto the airship to escape. The world's destruction tears the ship apart, and the Returners are scattered.

In the World of Ruin, an airship model that looks like the Blackjack scaled to 1/1200 its original size, is being sold at the Auction, but winning it is impossible.

The original version of "The Airship Blackjack" is included on the music player in Final Fantasy XV. The Memories of FFVI album it is the tenth track of is bought for 100 gil from JM Market in Taelpar Rest Area. A new arranged version appears in Dissidia Final Fantasy NT as a battle theme.

One of the Errands, "Storm of 777", mentions the Blackjack:

The Blackjack, the casino ship is at the port. The slot machine at the left end of the ship is said to be loose. You should try it out!

The outcome is as follows:

The Casino ship Blackjack is at the port Limberry castle. The slot machine on the left hand side gave us 777, the jackpot. Nothing happened so we asked Setzer about this. He said he deliberately lowered the pay-off rate. "Gambling's not fun unless there's some risk.

The Blackjack appears in an Airship Field Music Sequence for the theme, "The Airship Blackjack".

When Setzer attacks the enemy, he uses Dive Bomb which makes the Blackjack attack the enemy.

The Blackjack is the setting for a regular dungeon, and is also featured in the Challenge Events Legendary Plunder, Touched by Magic, and Back to the Skies.

The party is en route to the Floating Continent by airship in an attempt to put a halt to Gestahl's plans and prevent the end of the world, when they are set upon by Imperial airships. 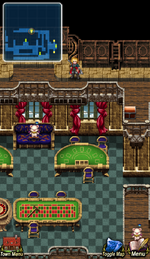 If Edgar is in the party when they enter the Blackjack the first time, Celes gets the coin for the coin toss bet she has with Setzer from him, instead of just already having it. If both Sabin and Edgar are in the party, Sabin will react to the stunt. This is because Edgar once rigged a coin toss with Sabin when the two were deciding who would become king, neither really caring for the position.

If Edgar is in the party when Setzer explains how to fly the airship, Edgar will appear during the tutorial alongside the party leader. This is likely because Edgar is a machinist, and thus would find the explanation interesting.

The player can view an extra scene within the Blackjack of Cid and Setzer fixing it, if, after leaving Emperor Gestahl's banquet; instead of heading to Albrook, the player heads for Blackjack's crash site instead. 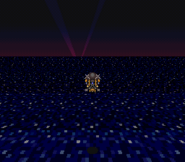 The Blackjack on the world map.

The Blackjack on the world map (smartphone). 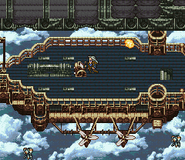 Battle over the Floating Continent (SNES). 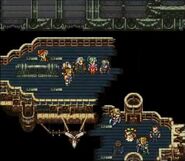 The Blackjack is destroyed (SNES).

Blackjack's Dive Bomb from the Slots.

The Blackjack is named after the card game of the same name, also known as Twenty-one. It has blackjack tables in its casino.