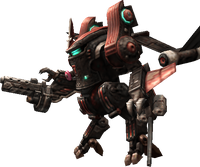 Blackburn (ブラックバーン, Burakkubān?) is an enemy family in Final Fantasy Type-0 which contains only one enemy. It is a bipedal flying magitek armor, and is a weapon of war deployed by the Militesi Empire. It is driven solely by Colonel Faith.

In developing the second aerial MA, engineers borrowed a considerable amount of teknology from the Helldiver, the inspiration for this model. However, they did a complete overhaul of the interior mechanisms and, in turn, succeeded in nearly doubling the Blackburn's maximum output and increasing maximum velocity to 448mph. Moreover, thanks to the advent of more compact C-Engines, the S-497 Airborne MA boasted improved cruising speed and operation time, allowing this MA to cover the entire battlefield with ease.

At the onset of war, all but a handful of machines were under construction with only one anywhere near completion. That MA was reoutfitted with custom equipment, sanctioned under a new name—the Gabriel—and presented to Brigadier General Qator Bashtar. The general quickly set out to test his new MA in combat with overwhelmingly positive results. The Blackburn, by contrast, did not see its first battle until Colonel Faith piloted the new model in the skirmish at Eibon. Mass production of the airborne MA moved along a rather slow pace, and there were only fifty-seven functioning units in existence by the end of the war.

Colonel Faith pilots the Blackburn when the Dominion of Rubrum launches its campaign to reclaim Eibon. Faith first defends Toguagh, but its energy barrier falls, and he is forced to flee into the city where he defends the city square from Class Zero. He is beaten and heads for Eibon, the Militesi Empire main stronghold in the area, but Rubrum forces neutralize its enemy barrier as well, and Class Zero invades the city and defeats Faith on his Blackburn a second time.

This section about an enemy in Final Fantasy Record Keeper is empty or needs to be expanded. You can help the Final Fantasy Wiki by expanding it.
Final Fantasy Type-0
Retrieved from "https://finalfantasy.fandom.com/wiki/Blackburn_(Type-0)?oldid=3240487"
Community content is available under CC-BY-SA unless otherwise noted.