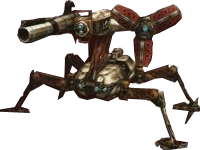 Black Widow is a boss in Chapter 5 of Dirge of Cerberus -Final Fantasy VII-. It is a relatively easy fight compared to some of the earlier bosses encountered. At a distance, its normal machine gun attack is easily avoided because the robot gets confused when the player passes to the other side of the room. This robot has a massively powerful laser attack, but it can be avoided if the player runs in a zigzag pattern.

[view · edit · purge]Latrodectus is a genus of spider in the family Theridiidae, many of which are commonly known as widow spiders. Individual species vary widely in size, but in most cases the females are dark and identifiable by reddish hourglass markings on the abdomen. The spiders' venomous bite is considered particularly dangerous because of the neurotoxin latrotoxin, which causes the condition latrodectism, both named for the genus. The female black widow has unusually large venom glands and her bite is particularly harmful to humans.

Retrieved from "https://finalfantasy.fandom.com/wiki/Black_Widow_(Dirge_of_Cerberus)?oldid=3239342"
Community content is available under CC-BY-SA unless otherwise noted.