Black Waltz No. 3 is a boss from Final Fantasy IX. It is the third and final winged black mage manufactured by Zorn and Thorn to apprehend Princess Garnet.

The third of the Black Waltz-type black mages, Black Waltz 3 is fought on the cargo ship when the party is on the way to Alexandria, just as Zidane implements his plan to steal the ship and go to Lindblum instead. When the regular black mages attempt to protect Vivi, it wipes them out in a Thundara attack, sending them flying off the ship.

Vivi becomes enraged, and a battle ensues. After being defeated, Black Waltz No. 3 refuses to accept it is not invincible and commandeers Zorn and Thorn's small airship. It pursues the cargo ship until it loses control of the craft and crashes into South Gate.

Later, Black Waltz No. 3 attacks the train containing Garnet, Marcus, and Steiner, greatly weakened but still seeking to capture Garnet. She attempts to question Black Waltz No. 3 of her mother's intentions, but it blindly attacks and is destroyed at last.

Can't escape. Characters do not pose on victory. No rewards given.

Hit, Fire, Fira, Blizzard, Thundara, Thundara (all)
I no can eat!

The train to Treno

Hit, Fire, Blizzard, Thunder, Freeze
I no can eat!

Get out of my way! Do you dare fight a Black Waltz?

The battle begins with Vivi going into Trance. Unlike Black Waltz No. 2, Black Waltz No. 3 doesn't counter Vivi's spells. Steiner should be using sword magic until he runs out of MP, or toss a potion if needed. Zidane should focus on passing around potions to the injured party member, or focus on stealing equipment off the boss.

Despite the Waltz's use of high level magic (Thundara, Blizzara, Fira), the only tough part is when the Black Waltz is airborne. To prevent this, none of the party members should attack, for this will cause the Black Waltz to fly into the air for some time and deal Thundara spell to all members of the party while also being immune to further normal attacks.

The Black Waltz is more volatile, and its attacks do more damage, but the player cannot lose this battle unless they command the characters to attack and knock out Garnet. This is because Black Waltz No. 3 will never attack Garnet, and if she is the only ally left standing, the boss will inflict damage upon itself. It is recommended that Marcus is kept alive, because this Black Waltz has some valuable items that Marcus can steal, which are useful for Vivi later on; plus, it helps add damage to Zidane's Thievery skill acquired much later.

Black Waltz No. 3 appears as an enemy boss in the ninth chapter.

One of the elite black mages who serve Alexandria. It looks down on all creation as it sees destruction as the only purpose for its existence. It will go to any length to do its duty, a mad light dancing in its eyes...

The Black Waltz No. 3 appears as an enemy.

Black Waltz No.3 appears as an enemy in Battle Music Sequences.

Black Waltz 3 appears as an enemy during the second part of the "Shattered World" event. In battle, Black Waltz 3 uses Thundara. 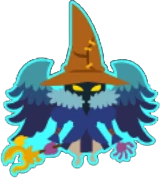 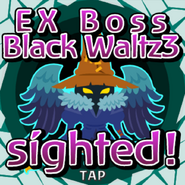 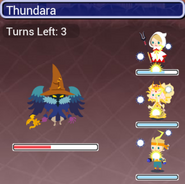 Thundara.
Add a photo to this gallery

Black Waltz 3 appears as an enemy. 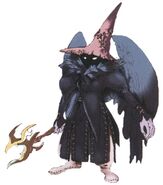 Concept artwork of his broken state.

First battle flying state.
Add a photo to this gallery

Retrieved from "https://finalfantasy.fandom.com/wiki/Black_Waltz_3?oldid=3184091"
Community content is available under CC-BY-SA unless otherwise noted.