A projectile that came from the faraway world of Orience. This magically materialized card is said to have been used by a young man assigned to a group called "Class Zero." This unique projectile can be used like a bullet or like a sword, and can even be used to cast magic. It holds great power befitting of it being called a "trump."

Black Trump (最後の切り札, Saigo no Kirifuda?, lit. Final Trump) is a recurring weapon in the series.

Black Trump is the ultimate weapon for Ace. It provides 68 Attack and has a 10% chance of inflicting Instant Death. It can be dropped from True Gilgamesh (with Ace) or exchange for 15 tickets on Square Enix Members site (PSP version). It sells for 1 gil.

Black Trump is a Throwing weapon, obtained as Ace's STMR. It provides 62 ATK and 169 MAG. 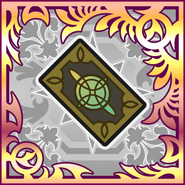 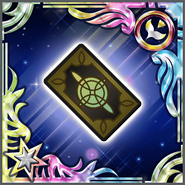 The weapon's associated color and being the "last" weapon of its kind may refer to the Ace of Spades, one of the highest values within a deck of cards that is considered a two way value variable in many card games; in definition, a trump card.

Within the culture of the American military, the Ace of Spades is considered a sign of good luck, and is worn as a good-luck-charm into battle. The Ace of Spades' symbolism ties into its origins from tarot cards and being used in divination: black-lettered cards symbolize harsh and ominous elements, while the total amount of 52 cards in a deck corresponds to the number of weeks in a year. The Ace of Spades represents the coming of Yule, or the last week of December, which was feared in ancient times as a grave period in the heart of winter. It is also interpreted to be other signs of misfortune, but a popular consensus is that it is a shovel to dig graves or a sword used to wage war.