The Black Robe (くろのローブ or 黒のローブ, Kuro no Rōbu?) is a recurring robe from the Final Fantasy series. It is usually exclusive to the Black Mage job, but sometimes Time Mages, Sages, or Summoners can equip it as well. It usually boosts the wielder's Intelligence and elemental damage dealt by the wielder.

A robe that casts Blizzara when used.

The Black Robe is a piece of armor exclusive to the Black Mage class. It resists Time and Ice, and casts Blizzara when used as an item. It grants +24 Defense and +2 Weight. It is found in the Flying Fortress.

A black robe that enhances intelligence.

The Black Robe grants +35 Defense, -5% Evasion, +21% Magic Defense, +10 Intelligence, and resistance to the Fire, Ice, Lightning, and Poison elements. It is the second strongest light armor only bested by Black Garb. It is found in the Mysidian Tower, guarded by the White Dragon.

The Black Robe can be equipped by the Onion Knight, Freelancer, Black Mage, Red Mage, Evoker, Magus, Summoner, and Sage.

Robe made for those who use black magic.

The Black Robe can be purchased at the Cave of Eblan for 10,000 gil and can only be equipped by characters that can use Black Magic. It grants +8 Defense, +7 Magic Defense, +7 Magic Evasion, and +5 Intelligence.

In the Easy Type version, Black Robe gets +5 to Spirit instead of Intelligence.

Black Robe can only be equipped by Palom who initially comes equipped with it. It has a defense of 8, magic defense of 7, and magic evasion of 7 with a bonus of +5 Intelligence.

Robe made for those who use black magic.

The Black Robe grants +14 Defense, +14 Magic Defense, +20 Magic Evasion, and +5 Magic. It can be bought in Phantom Village or the Great Sea Trench for 8,000 gil, and found in the Pyramid of Moore. At the pyramid the player must disable some spikes along its path to reach the chest. The chest itself is a monster-in-a-box trap that releases an Archeosaur.

The Black Robe can be synthesized in Daguerreo (using a Gaia Gear and N-Kai Armlet) and can be equipped by Vivi and Quina. It teaches the Black Magic spell Flare, MP+20% and Reflectx2, and boosts the bearer's Shadow-elemental attacks and skills. It grants +43 Defense, +4 Magic Defense, and +2 Magic level up bonus. Though not mentioned in the menu, it makes the wearer weak to Fire. The robe is used in synthesis to make the Robe of Lords.

In the original PlayStation 2 version, the Black Robes are high-level robes that can be equipped after obtaining the Mystic Armor 10 license. They provide 38 Defense and 10 Magick Power, as well as boosting all Dark-elemental attacks by 50%. They can be purchased at Balfonheim Port for 13,500 gil, and made in the Bazaar along with a Black Mask for 22,800 gil by selling Dark Crystal x8, Blood Wool x9, and Prime Tanned Hide x7.

In the Zodiac versions, the Black Robes provide 56 Defense, 5 Magick Resist, 66 MP, 12 Magick Power, increase the potency of Dark-elemental attacks by 50%, and require the Mystic Armor 10 license for 75 LP. They can be found as a treasure in Cerobi Steppe (North Liavell Hills) and Necrohol of Nabudis (Cloister of the Highborn), poached from Mistmare (5% chance), and made in the bazaar for 12,800 gil after selling the same items as before. They can also be stolen from Ahriman (rare; Stage 29 of Trial Mode), Deathscythe (uncommon; Stage 54), and Zodiark (common; Stage 97). They can be equipped by the White Mage, Red Battlemage, Black Mage, and Bushi.

In The Zodiac Age version, the Black Robes is part of a powerful Yiazmat-killing strategy if the player combines a Shikari with a board that can equip the Black Robes, so they can wield the Yagyu Darkblade with the robes.

These pitch-black vestments increase damage inflicted by magicks of the primary elements.

The Black Robe boosts Fire, Ice, and Thunder damage dealt by the user, and bonus HP by 60 and MP by 30. It can be bought in the shops for 13,000 gil after storyline battle 28, or found with the Treasure Hunter ability in Limberry Castle Gate as a rare treasure.

The Black Robe boosts Fire, Ice, and Thunder damage dealt by the user and teaches Return Magic to Black Mages. It provides +21 Defense, +2 Magic, and +36 Resistance, and can be obtained as a random reward for completing a mission or by increasing Magic to level 15.

The Black Robe halves Water damage dealt to the wearer and teaches Replenish MP to Seers. It provides +23 Defense, +46 Resistance, and +2 Magick, and can be bought for 1,800 gil in the shop after creating it in the Bazaar after using a Mind Ceffyl, Quality Pelt, and Black Thread.

The Black Mage Robe gives the wearer 30 Defense and 10 Magic Power. When equipped alongside the Black Mage Hat, the wearer will cast offensive spells when controlled by AI. It can be made from the Magical Raiment scroll, and bought for 210 gil.

Robe favored by masters of attack magic. For all tribes.

It also provides +5 to Dark resistance, has one empty slot, and can be bought for 480 gil. It can also be created for 120 gil by using Silk, Dark Dust x3, and Elemental Gem. When turned into a jewel, a level 3-9 Black Mage Robe makes a Spirit Moonstone, level 10-19 makes an Ebonite, and level 20-30 makes a Dragon Eye.

The Black Robe is the Black Mage crown's special armor. It provides +10% Magic and Intelligence. The Black Robe can be bought in Liberte, Invidia, Urbeth, and Guera for 350 gil.

This robe is the embodiment of a black mage. The black robe makes the wearer appear slimmer, and gives off the illusion of longer legs, making for a design that seeks to spook others. It is made from a material darker than the night itself, which blocks all sunlight. It also has spellbinding words embroidered on its cuffs that amplify magical energy. Those who wear this garment will be immediately recognized as black mages. Adding a pointed hat to this outfit would give it the perfect touch!

Black Robe is a Robe obtained by crafting it for 600 gil, x5 Dark Crysts, x10 Dark Megacrysts, x5 Gaia's Tears, and x5 Spellsilks, by finding it during the exploration of Ghost Ship, and by completing Intermediate C-4 of the Colosseum. It provides 34 DEF and 20 MAG. 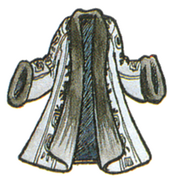 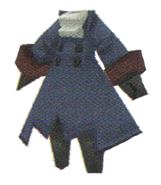