Relm: I couldn't miss the chance to practice my drawing!
This article is in need of a few pictures. Perhaps you can help by uploading a picture of Warp, Pyroblast, Comet, and Twin Meteor, from the iOS/Android/mobile version.

Black Magic (くろまほう, Kuro Mahō?) , also called Black, is an ability in Final Fantasy IV used by Rydia, Tellah, Palom, Fusoya, and Golbez. Black Magic is the counterpart to White Magic, focusing on damaging the target. The Black Magic command's Charge Time varies, and its charge time is taken from the spell the player selects to cast. Fusoya and Golbez (only in to 3D versions) knows all the Black Magic spells, while Tellah eventually learns all these spells, except for Quake, Death, and Flare via a story event.

In the 3D versions, Dualcast is an Augment ability that is compatible with all forms of magic.

On the Easy Type version, the majority of the casting times for spells were reduced from their original casting time, making these spells faster to cast.

The following is a list of Black Magic spells that can be learn and used through the Black Magic battle command.

Item magic's spell names are hidden as when the player uses an item, the name used will be that of the name of the item which overrides the spell's name. Item magic can be used even if the user is silenced. In the 3D versions, item magic's power increases and decreases with the modification of the Intelligence stat.

In the 3D versions, some of the original and new spells were classified into Black Magic spells. 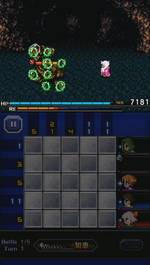