Why would anyone build a village in the middle of a dying forest...?

The Black Mage Village is a location on the Outer Continent in Final Fantasy IX populated by black mages who have become self-aware and desire a life of peace. The black mages lead a secluded life in their village concealed by the illusion of the Dead Forest. The houses resemble the head and hat of a typical black mage.

The village was created by Event Planner Nobuaki Komoto.[1]

Zidane and his party hear about self-aware black mages from the dwarves in Conde Petie and decide to search them out. A bunch of owls beckon them on, going down one of either two paths. The party finds the village, but the black mages are scared of them.

After Vivi and the party befriend the mages, Mr. 288 tells Vivi that Kuja's palace is on the eastern side of the continent. During their stay Zidane reveals to Princess Garnet that he remembers nothing of his early childhood but a blue light. Vivi learns black mages have a fixed lifespan and many of the earliest models have already begun to "stop", and been buried at the village cemetery M. 288 looks over. Many mages do not understand the concept of death, however. Vivi realizes that he will also likely die soon.

After losing his eidolons and Queen Brahne's support, Kuja comes to the village to deceive the mages to follow him, promising to extend their fixed lifespans in return. Most mages follow, but Mr. 288 stays behind, as well as couple mages who are looking after a chocobo egg. When Vivi learns of this he returns to the village, and Mr. 288 divulges that Kuja has gone to Mount Gulug. Kuja abandons the mages after learning of Trance, and the mages return to the village.

When the party returns from Terra, the displaced genomes make their home in the Black Mage Village. The black mages try to teach them the ways of Gaia, despite their own naivety. The chocobo chick has hatched, whom they name "Bobby Corwen".

The Grove is the maze-like entrance to the Black Mage Village. The player should go down the path where the sign says there are no owls.

When the party arrives the black mages gathered here flee in terror. The player will then have access to three ATEs: "Life On The Run", "Gourmand's Nose" and "Everyday Life".

The Weapon Shop is run by No. 293. Despite the name, the shop also sells armor (see Shops below).

Two black mages are inside the Water Mill watching over a chocobo egg. Quina tries to eat it, but they fiercely protect it. The egg eventually hatches and the two mages that stayed behind to take care of it, No. 33 and No. 111, name the baby chocobo Bobby Corwen. Mogryo the moogle can be found outside the Water Mill.

The inn is run by No. 234. During the first visit, the party spends the night here and Zidane reveals a bit of his childhood to Garnet.

The item shop is run by No. 163. Before the party enters the Shimmering Island, the player can obtain a hidden Black Belt here (see Quests below).

The pond is underneath the Synthesis shop and the Item shop. Clueless to the concept of death, No. 56 claims that when his friend No. 36 comes back out from the ground, he will personally wash him off in the pond.

The Black Cat Synthesis Shop is run by No. 32 and No. 192. The player can climb the ladder to access the Rooftop and claim treasure.

The Cemetery is where mages bury those who have "stopped" (died). During the first visit to the village, No. 288 and No. 56 can be found here. No. 56 is particularly affected by his friend, No. 36, being buried.

When the party first meets Mogryo in the Black Mage Village, he will have a letter:

He sends a letter to Mocchi at the Iifa Tree:

After the party has returned from Terra they can start a side quest to fix Mognet Central by talking to Kupo in Alexandria. As part of this chain of letters Atla in Burmecia sends a letter to Mogryo:

Upon first arriving in the village, the player will be subjected to numerous ATEs. Before talking to the shopkeeper further north, the player must wait until the ATE "Everyday Life" first appears and watch it before any others on the list. The black mage ponders his life as a shopkeeper. The player can then visit the shop and speak with him, choosing "I'll have the usual".

He will abandon his position behind the counter to rummage through his inventory, which gives the player the space to climb the ladder behind his counter and retrieve the Black Belt from the chest above. If the player does not follow these steps, they can go to the roof of the shop via the ladder in the synthesis shop to hear the shopkeeper talking about "the usual." After hearing this, the player can go back down into the shop and get the shopkeeper to move.

Gramophone at the inn[]

If the player buys the key items Doga Artifact and Une's Mirror in the Treno Auction House, and then examines the gramophone at the inn, the background music will change to "Doga and Unei's Theme" from Final Fantasy III. This only works after the player has returned from Pandemonium.

The party can battle Myconids and Zemzeletts in the Dead Forest before entering the village. Quina can eat these to learn Mighty Guard and White Wind, respectively.

In the forest surrounding the village on the world map, the party can battle Griffins, which can also be eaten to learn White Wind.

The shops are temporarily unavailable for a portion of the game when the mages leave the village.

The theme of the village is called "Black Mage Village" and is a remix of "Vivi's Theme" and may also be inspired by "Mystic Mysidia". "Unrequited Love" plays during Zidane's recital of his story during the night. It is a variation of "Zidane's Theme".

Also, in the endgame, if the player has Une's Mirror and Doga's Artifact, "Doga and Unei's Theme" will play upon examining the gramophone at the Inn.

When the party first enters the village, the frightened black mages run around saying, "The humans are here". Incidentally, none of the party members are human (Zidane = Genome, Garnet = Summoner, Vivi = Black Mage, Quina = Qu). 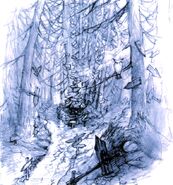 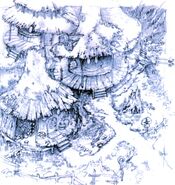 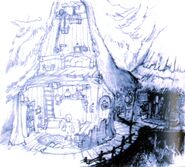 Artwork of a shop. 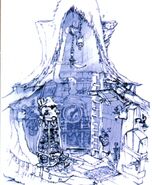 Artwork of a shop.

Artwork of the inn.

Artwork of the weapon shop. 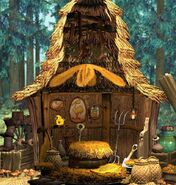 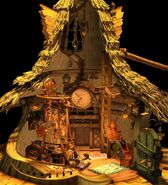 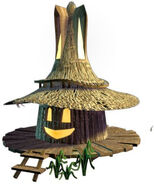 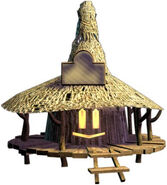 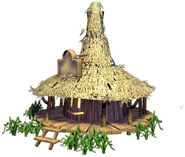 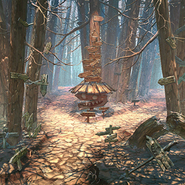 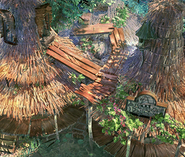 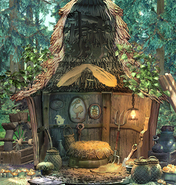 Inside the water mill.

A black mage dispels the illusion of the Dead Forest.