Cid Pollendina: Oh, shut up and help me remodel the Black Mage (The After Years) page!
Please expand this article into a full one. The following tasks need to be completed:

Black Mage
The Black Mage is a generic Black Mage temporary party member in Final Fantasy IV: The After Years.

The Black Mage, along with the White Mage, is ordered by Porom to accompany Ceodore and the Hooded Man to Baron. When they reach the castle, they are denied entrance and have to enter the castle by using the Ancient Waterway. After they sneak into Baron Castle, the mages leave Ceodore and the Hooded Man to fend for themselves and head back to Mysidia.

Later in the story, the Black Mage accompanies Porom and the White Mage to Mount Ordeals so they can request help from Kain. When they reach Mount Ordeals, they find the tomb of Cecil and Golbez's father, Kluya. After having a brief conversation with his spirit, they exit the tomb and are attacked by numerous monsters.

Kain rescues them and together they head back to Mysidia, that is under siege by monsters. They rescue the Elder and tend to his wounds. The Black Mage is last seen guarding the Elder while the White Mage oversees his healing process.

The Black Mage joins for a short time during Ceodore's Tale. He also joins during the third part of Porom's tale and he is usable during Porom's Challenge Dungeon.

The Black Mage is able to cast Black Magic. He learns no new spells as he levels up and has no Band abilities.

The Black Mage may equip bows and arrows and rods as weapons and hats, clothes, armlets and one Robe as armors. Due to being a guest his equipment is very limited.

He is equipped with a Rod, a Leather Cap and Leather Clothing the 2 times he joins the party. 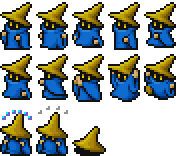 Black Mage in the 3D remake for smartphones.

The Black Mage's level up pose (PC).
Add a photo to this gallery
Final Fantasy IV: The After Years characters
Retrieved from "https://finalfantasy.fandom.com/wiki/Black_Mage_(The_After_Years)?oldid=3026905"
Community content is available under CC-BY-SA unless otherwise noted.