Black Mage, also known as Wizard, is a job from Final Fantasy Tactics. The offensive magickal job class wielding Black Magick, Black Mages are not as common as White Mages. Their magick does heavy damage, and can easily take out many units at once. Their spells do not differentiate between friend and foe, so players using Black Mages have to be careful. It takes 8,150 JP to master. It takes 8,400 JP in the War of the Lions.

Leveling it to level 3 unlocks Time Mage in the War of the Lions; leveling it to level 5 with White Mage, Time Mage, and Mystic unlocks Arithmetician; while mastering it as well as Knight, Samurai, Geomancer, Dragoon, and Ninja—as well as having the unit get 20 kills (the units must turn into chests or crystals to count)—to unlock Dark Knight. The Dark Knight is not available in the PlayStation version, where the job unlock level requirements are also a little lower.

The Black Mage possess the highest magick power of any standard jobs.

Black mage job command. Enables the use of attack magicks in battle.

Firaja, Blizzaja, and Thundaja have a 30% chance of randomly being learned in battle by a Black Mage who hasn't learned the spell yet and is damaged but not KO'd by the spell, or absorbed and heals at least 1 HP. Nullifying the damage does not count.

Arcane Strength increases damage inflicted/HP restored by magicks by 33%, and increases success rate of status attack magicks. Also works for other abilities that depend on the Magick Attack stat, like Iaido, Geomancy, and Limit.

The Black Mage is a offensive-oriented magick job focused on dealing raw elemental damage to their foes, although they also can use non-elemental magick and a few debuffs. They boast the highest magick and MP attributes in the game, while also have the lowest defensive stats. They are invaluable in fights with lots of melee enemies, as they tend to get clustered together, allowing the Black Mage to hit multiple enemies at once. However, since their magick can also hit allies, the player needs to be careful to not accidentally strike their own squad with spells.

Black Mages are often best used as the main magick job, while secondary job commands from other spellcasters supplement their arsenal. White Magick provides a flexible library of spells, allowing for a mix of offensive and healing magicks, while Time Magick allows the Black Mage to cast Haste and Quick on themselves for shorter cast times, while also giving access to Meteor. They can also use Summon, which is useful when both enemies and allies are clustered together in battle, as summons only hit enemy units.

Like all spellcasters, they greatly benefit from the Time Mage's Swiftness support ability to shorten their cast times, although they can use their own Arcane Strength to further increase the potency of their spells. They can also use the Mystic's Manafont to remedy their high MP costs.

Black Mage appears as an enemy.

Black Mage appears as a card in the Ivalice Special Arena has a limited-time special arena with eighteen floors. 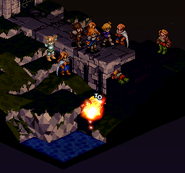