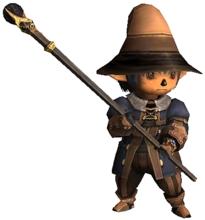 Black Mage is one of the six basic jobs available to players at the onset of Final Fantasy XI. A Black Mage has a wide variety of Offensive Magic spells that allow them to do extremely high damage to an enemy, especially at later levels. A Black Mage is the only job with access to the Ancient Magic spells: Freeze, Tornado, Quake, Burst, Flood, and Flare, in addition to being the sole class with access to tier 2 and 3 "-ga" line of Elemental Spells. They also have access to a somewhat more limited ability to weaken enemies through elemental enfeebling magic. Also, because it is desirable to end a Skillchain with a magic burst, Black Mages are one of the more popular classes to invite to parties as well as to Burning Circle battles.

Although any race can be any class, because of their high MP count and their naturally high Intelligence, Tarutaru make ideal Black Mages.

Since the Black Mage is a basic job, players can choose to become a one at any time. Players who choose to start as a Black Mage are given a scroll of Stone and an onion staff in addition to their adventurer certificate and nation's ring (if applicable). 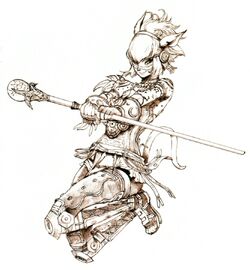 This is the traditional support job of Black Mages. It unlocks decent curing abilities, raise, reraise, and barspells for more opportunities in parties. At high levels, it enables use of teleportation spells and haste.

Red Mage is an alternative but similar support job for Black Mage. It gives faster casting and access to the Dispel and Gravity spells, both of which are useful when soloing. This is by far the most popular support job for Black Mages in endgame play to help them cast their very powerful, but very slow, high level spells with Red Mage's Fast Cast. It does not, however, give access to any healing magic other than basic hit point restoration and a White Mage support job gives access to many of the same spells at an earlier level. At high levels, it also enables use of Convert and Refresh, aiding in MP conservation.

Scholar has become a popular support job choice since its introduction. Dark Arts reduces the MP-cost, recharge time, and casting-time of all of a Black Mage's native spells while boosting enfeebling skill to a B-rank. Light Arts does the same for White Magic, boosting healing, enhancing, and divine skill to a B-rank. Sublimation sets a portion of the caster's HP aside to be restored later as MP in a similar manner to the Refresh spell (though they are not compatible). At high levels, it provides access to Manifestation, which enables the Black Mage to convert enfeebling or dark magic into AoE if needed.

It is unusual to see Black Mages using any sub other than White Mage, Red Mage, or Scholar, but Ninja and Summoner are sometimes used in unusual circumstances or by inexperienced players.

A Tarutaru Black Mage appears on a Triple Triad card.