The Black Mage is a dressphere in Final Fantasy X-2 and Final Fantasy X-2: Last Mission. It is obtained after the party's first mission to the Floating Ruins on Mt. Gagazet. Its contains the basic elemental spells and access to MP Absorb, Focus, and other abilities that expedite the casting of Black Magic. Black Mage has low Strength and Defense, but high Magic Defense and Magic.

It is one of the few dresspheres that cannot physically attack unless afflicted with Berserk or using the Mug command, whereupon the Black Mage will swing her staff at the enemy, damaging them with magical energy (she does not actually hit the enemy with her weapon).

The Black Mage dressphere seems to be drawn from the memories of a man from Zanarkand 1000 years ago, much like the Songstress is drawn from Lenne's. Judging from his voice and references made in Zanarkand during Chapter 5, the person in the sphere may be Maechen.

The Black Mage dons a hat and robes with a feminine twist. Yuna wears a long purple dress with brown trim and belt. It has a slit on the right side and a pink strapped garment around her waist. She has pink legwarmers and black ankle boots. She wears a large purple hat and black fishnet gloves.

Rikku wears a short magenta dress with black trim and a red strapped garment around her hips. She wears yellow and magenta stockings and black boots. She wears a large magenta hat and black fishnet gloves.

Paine wears a black bandeau and pants with blue legs. She has a red strapped garment around her waist and black boots, a large blue hat and black fishnet gloves.

The three wield rods Yuna used in Final Fantasy X, with Yuna brandishing the Nirvana, Rikku wielding the El Dorado, and Paine wielding an Enchanted Rod. In Final Fantasy X-2: Last Mission, Paine's rod is replaced by the one she wields while wearing the White Mage dressphere.

Yuna's victory pose is to jump up in the air. Rikku spins around and bends over to taunt the enemy, while Paine holds her rod above her, places it on the ground, and fixes her hat.

Black Mage can use Black Magic, Focus, MP Absorb, and Item. It has no Attack command, but can still attack physically with Mug. Focus raises the caster's Magic by three points every use, stackable up to ten points. It costs 10 AP to learn. MP Absorb requires Focus to be learned and requires 10 AP to master. It drains MP from the target.

The Black Mage dressphere increases Defense, Magic and Magic Defense by 1 point per each level. Multiple copies can be found on the ground inside the tower or bought in shops. The skillset is slightly different for each girl, each possessing different type of elemental magic. Its regular attack range is one tile ahead of the character.

Yuna as a Black Mage.

Rikku as a Black Mage.

Paine as a Black Mage. 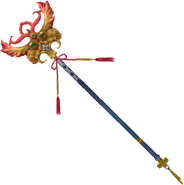 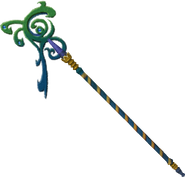 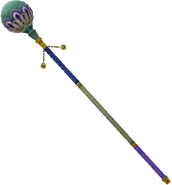 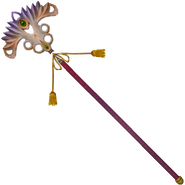 Elements of the Black Mage dressphere are seen in this concept art. 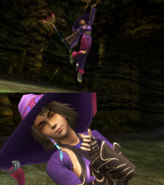 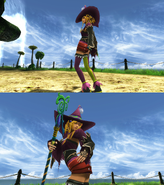 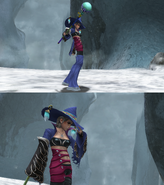