The Black Mage is a job in Final Fantasy V obtained after the Wind Crystal shatters. It is the first fully offensive spellcasting job in the game (barring Blue Mage as they start with nothing), and is the first job to utilize elements in their attacks.

The Black Mage has the second-highest Magic Power, being beaten out by the Summoner in the original version, as well as the Oracle in the Advance, mobile and Steam remakes. As they can equip rods, the Black Mage is further capable of increasing their damage output of specific elements by 50%.

Mastering Black Mage for all four characters in the mobile and Steam versions earns the player the achievement "Master of Black Magic".

The party dons the iconic blue robes and pointy hat, which conceals their faces. Galuf keeps his beard, and Bartz resembles the Black Wizard from the original Final Fantasy. Krile most closely resembles the Black Mage design from the original Final Fantasy and Final Fantasy III. Bartz, Faris and Lenna wear a crescent moon symbol on their hat, while Krile has a star. The Black and White Mage attires indicate Faris is female before the party even finds out.

Any job equipped with Black Magic Level 1 will gain their character's base Freelancer Magic +16 if their default stat is lower. For each additional Black Magic level up to level 6, the Magic bonus is increased by 3 per level, for a maximum of +31 Magic at Black Magic Level 6.

Thus, the base Magic stat for a character with Black Magic equipped is as follows:

Upon mastery, Freelancers and Mimes gain the Black Mage's base Magic unless they already have a higher base from another mastered job.

Black Magic is the job's innate command ability, natively able to use all spells of this classification. Leveling up as a Black Mage also allows the character's other jobs to use increasingly powerful spells with the skillset. 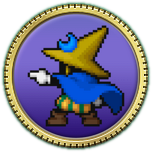