Abilities:
Flare (I-III)Passive(s):
Boosts magic from the start of battle for 2 turns

The Black Mage is a wind-elemental Eidolon that appears in Final Fantasy Dimensions II. It can be obtained as a signet for Jornee to equip by completing the "Azure Glacier" main quest of the Eureka arc. The Black Mage summon is one of Jornee's most strongest signets, providing strong magic stats and granting the passive ability to increase her magic stat at the start of battle. In addition, it teaches Jornee one of her strongest magic-type abilities, Flare.

In the original free-to-play versions of the game, the Black Mage signet was a god-tier wind summon that could only be obtained through the game's summon draw shop. However, it taught the Burst ability instead of the Flare ability. In the premium versions of the game, the Black Mage's Burst ability was transferred to Jornee's Summoner signet instead, with it being replaced with the Flare ability from the removed Rydia signet. The Black Mage was an SSS rank summon and could be equipped by any party member. In addition, should the player draw the Black Mage signet from the shop, they would obtain a costume voucher to obtain a Black Mage themed costume for either Morrow, Wrieg, Parai, or the Deathlord.

The Black Mage's special attack is Reaper's Judgment, which attempts to inflict instant death to all enemies. Summoning the Black Mage costs 2 bars from the Summon Gauge.

The following are the abilities Jornee can learn from the Black Mage: 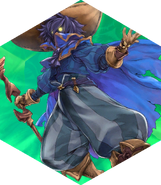 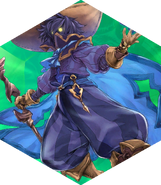 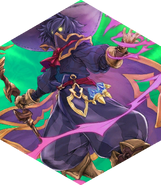