Intro: Defeat Ominas at the Ruins of Centro Keep

A in MP, INT
See stats

Equip these Black Magic warriors with rods so they can lay waste to enemies in a single stroke.

The Black Mage is a job in Bravely Default. It is obtained after defeating Ominas Crowe at the Ruins of Centro Keep.

A Red Mage of the same job level will have significantly better stats than the Black Mage in most areas (at the cost of a slight reduction in Intelligence). For this reason, players interested in the Black Mage's attack magic may be better off leveling the Black Mage until the desired magic level is unlocked and then switching to Red Mage with Black Magic selected as the job command.

The Black Mage takes the appearance of traditional Final Fantasy Black Mages, with some changes. Agnès and Edea wear a short black one-piece dress under a high-collared black cloak with purple lining held by black cat brooch at the neck and black elbow length gloves. They wear a large-brimmed hat with blue lining and a red tassel on the top, and black thigh-high boots with blue trim. Edea also wears a garter belt and her signature black and red bow.

Tiz and Ringabel wear a long, black, hooded cloak with a gold decoration at the back of the waist and red ribbons at the end. Light blue sirwal-style pants with a red string around the waist and purple elbow-length gloves. They wear purple shoes and smaller hats with red tassels on the top.

The Black Mage's Specialty is Black Resonance. Its Job command is Black Magic.

Agnès as a Black Mage.

Tiz as a Black Mage. 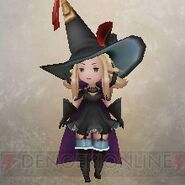 Edea as a Black Mage.

Ringabel as a Black Mage.

Ominas, keeper of the Black Mage asterisk.
Add a photo to this gallery
Bravely Default jobs and abilities
Retrieved from "https://finalfantasy.fandom.com/wiki/Black_Mage_(Bravely_Default)?oldid=3384427"
Community content is available under CC-BY-SA unless otherwise noted.