These knights are cursed to think but a single thought for all time--none shall pass.

Black Knights are characterized by wearing black, full body armor with gold outlines, although in their debut appearance in the original Final Fantasy their appearance varied depending on the console.

Black Knights (BADMAN on the NES) appear as regular enemies in the Flying Fortress. They are highly resistant to magic and have no real weakness, so resorting to physical attacks is the best option. Upon defeat they award a large number of Experience Points and gil, and may drop a Deathbringer.

Four Black Knights are encountered as an unwinnable boss fight at the very beginning. If the player wins through a cheat device, the NES version allows the player to progress as normal, but in the Dawn of Souls version, the player is sent back to the title screen. They later appear as regular enemies in Castle Palamecia.

A Black Knight also appears in the Dawn of Souls, 20th Anniversary, and all subsequent remakes. Minwu assists Scott in battle against the Black Knight upon his arrival in Raqia. It is not as much of a threat as it was in the original scenario.

Black Knights (SwordMan in SNES and PS) are encountered in the Tower of Zot. They are undead enemies with high Attack and Defense which can be easily defeated with fire-elemental attacks. Dark Knights are resistant to dark-elemental attacks. They may occasionally drop a Tent or a Cottage when defeated.

In the 3D versions, Black Knights are fought much the same as the 2D versions. They are quite simple to defeat, even in packs of two or four, because of their fire-elemntal weakness.

Black Knights return and now are inhabiting the Tower of Babil. They can be easily dispatched with fire- and holy-elemental attacks. Dark Knights are resistant to dark-elemental attacks. They always drop a tent and may occasionally leave a Cottage behind.

Black Knights can be encountered in Ceodore's Tale in Devil's Road, in Yang, Rydia, and Palom's challenge dungeons, and in the Lunarians Tale inside the challenge dungeon and Lunar Overworld. They can be easily killed with fire- and holy-elemental attacks. They always drop a tent and may occasionally leave a Cottage behind.

Black Knights are mechanical enemies that appear in the Vault alongside White Knights. They have a horse-like appearance, referencing the knight piece in chess. 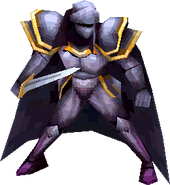 A Black Mage attacking a Black Knight and a White Knight in Final Fantasy XIV.