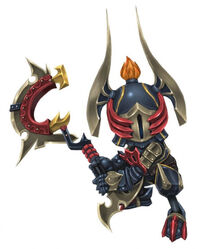 The Black Knight (黒騎士, Kuro Kishi?) is a Lilty warrior in Final Fantasy Crystal Chronicles trying to regain his lost memories. He is said to possess unbelievable strength, and a battle style similar to a Berserker.

Tales of the Black Knight[]

I came across the caravan from Alfitaria today. The town was already abuzz with talk of the Black Knight, but Sol had more tales to tell. Sol spoke with such enthusiasm that he actually seemed to admire him. It is astonishing how quickly the word of the Black Knight has spread in spite of the way miasma isolates every town.

When the Tipa Caravan crosses path with the Alfitaria Caravan lead by Sol Racht, he mentions to the party the legend of the Black Knight and how he was a hero.

Later the party runs into the Marr's Pass Caravan who are in need of help. They tell the party that they had challenged the Black Knight to a friendly duel, but that he was a raving madman and showed them no mercy. It becomes unclear if the Black Knight was a hero like Sol Racht said or a madman who murders anyone who crosses paths with him.

Sol Racht begins to seek an investigate on the Black Knight to uncover if he has truly become a mass murderer. Sol Racht himself does not believe the Black Knight could have commit such crimes. It is later discovered that sometime ago he had been hired by Hurdy to investigate a swamp that might hold clues to why people are losing their memories.

Confrontation with the Black Knight[]

So that was the Black Knight. Berserk is the only word that comes to mind. Swinging his weapon wildly, he hunted something I could not see. In a weary voice, he claimed that his memory had been stolen and that he is now searching for the thief.

The Tipa Caravan finally meets the Black Knight as he is yelling and swinging his spear. He claims that an unseen light is eating his memories away. As the unseen monster vanishes, he runs off leaving the party unharmed. The party runs into the Black Knight one last time when his memories are returning to him, but it is all too late as he is stabbed with a spear by a young Lilty named Leon Esla, claiming revenge for his father that he believes the Black Knight had killed.

Today I witnessed the death of the Black Knight. A boy named Leon Esla was riding with the caravan from Alfitaria. He drove his spear into the knight. The Black Knight seemed at peace when he died. I wish I knew why.

"Oh, Light...!" plays in all scenes with the Black Knights and during the scene after the Marr's Pass Caravan has been attacked by him. The title could be a reference to the light only he can see.

Leon is also the name of one of the characters from Final Fantasy II. He is separated from the rest of the party—one member of which was his sister—in an early fight and becomes a Dark Knight, leading him to be an antagonist in the story for the majority of the game. This mirrors the Black Knight's story: he was part of a group before meeting a tragic end, being separated from his family, and becoming a villainous character.

The Black Knight's real name is Leon, apparently named after the character of the same name from Final Fantasy II. [view · edit · purge]Leon is a name of Greek origin. The Greek λέων (leōn), meaning "lion," has spawned the Latin leo, French lion, Irish leon and Spanish león. During the Christian era Leon was merged with the Latin cognate Leo, with the result that the two forms are used interchangeably.