There were some spies come into the barracks the other day, but they got away before we could nab 'em. They was wearin' black cowls just right, so as to not be seen. Don't get me wrong, I ain't praisin' 'em, but if you'd seen some o' them things they was wearin', made o' fine wool an' tyrant hide, you'd've been impressed too.

The Black Cowl (黒頭巾 or くろずきん, Kuro Zukin?), also known as Dark Hood or Black Hood, is a recurring piece of headgear in the Final Fantasy series. It is usually a mid-level armor and tends to grant various bonuses.

The Black Cowl appears in the Dawn of Souls version. It is a mid-level armor, and grants +8 Defense, +1 Weight, +10 Evasion, and +3 Strength, Agility, and Stamina. It can be found in the Earthgift Shrine.

The Black Cowl can be equipped by Freelancers, Onion Knights, Monks, Rangers, Thieves, Black Belts, and Ninjas. It grants +15 Defense, +10 Magic Defense, and +2 Speed. It is bought and found in Amur for 4,000 gil (2,000 gil in the original version).

Black Cowl (Ninja Hood on the Easy Type) is a helmet that provides 5 Defense, 1 Magic Defense, 4 Evasion, and 1 Magic Evasion, as well as preventing Sleep. It also provides +3 Strength, Speed, and Stamina, and is found at the Sealed Cave. Like all hats, it can be equipped by every character except for Dark Knight Cecil, Cid, and Kain.

Black Cowl provides 7 Defense, 1 Magic Defense, 4% Evasion, and 1% Magic Evasion, resists, Sleep, and +3 Strength, Speed, and Stamina. It can be found in Yang's and Edge's Challenge Dungeons and in Cave of Eblan.

The Black Cowl can be equipped by many classes, and is the best piece of light headgear in the game, only surpassed in the Advance port by the Royal Crown. It grants +12 Defense, +2 Agility, and +2 Magic Defense, and can be bought in the Great Sea Trench or Phantom Village for 6,500 gil.

The Black Cowl (also called Dark Hood) grants +26 Defense, +17 Magic Defense, and +6 Speed. It can be bought only in the World of Ruin in Jidoor and Thamasa for 7,500 gil or stolen from Neck Hunter. It can be equipped by Locke, Sabin, Shadow, Gau, Mog, and Gogo.

The Black Hood is a mid-level headgear that grants +27 Magic Defense and halves Fire, Water, and Lightning-elemental damage. It is equipable by Zidane, Vivi, Dagger, Quina, and Eiko, and teaches Accuracy+, Death, and Locomotion. It is bought in Esto Gaza (after Desert Palace) for 2,550 gil and found in the Desert Palace. Both locations become inaccessible in the endgame.

Black Cowl is a mid-level mystic hat that provides 33 Magick Resist, 5 Magick Power, and 4 Speed. It can be bought at Rabanastre and Nalbina Fortress for 4,900 gil after the events in Mt Bur-Omisace, and requires the Mystic Armor 6 license for 30 LP.

In the Zodiac versions, it provides 33 Magick Resist, 60 MP, 5 Magick Power, 4 Speed, and requires the Mystic Armor 6 license for 40 LP. It can be bought in Mosphoran Highwaste and Phon Coast for 4,900 gil, found as a treasure in Dalmasca Estersand (Broken Sands), drops from Vulture (3% chance), stolen from Ring Wyrm (rare) in Trial Mode Stage 18, and is made in the bazaar for 4,800 gil after selling Fine Wool x4, Tanned Tyrant Hide x2, and Fire Magicite x5. It can be equipped by the White Mage, Black Mage, Red Battlemage, and Bushi classes.

The Black Cowl (Black Hood on the PlayStation) boosts HP by 72. It can be bought for 7,000 gil after the storyline battle 26 and found as a rare treasure at Finnath Creek with the Treasure Hunter ability.

The Black Hood grants a defense increase to all attributes as well as a "Quick" effect. It can be found in Valley of Monsters after obtaining the airship.

Black Cowl is a Defense-raising artifact, boosting Defense by 2.

A hood worn by ninjas who excel at carrying out covert maneuvers. Similar to the black garb, they are dyed black to enable to their wearer to blend into dark of night. Ninjas take pride in being one with the shadows, so much so that as a rule they never show their faces to avoid jeopardizing their mission. Though in general they do not carry out needless killings, they are merciless towards those who see their face.

Black Cowl is a hat that provides 28 ATK, 25 DEF, 25 SPR, and immunity to Sleep. It is obtained as Hayate's Trust Master.

The Stealth Hood is the ultimate headgear for Hawkeye should he undergo the Dark-Light job class of the Ninja, the Ninja Master. Said to have been made by the process of molding spiritual energy into physically tangible and mystically endowed objects by the process of Ninjutsu, this hood bestows its wearer the ability to hear even the softest of sounds from far away, allowing them to sense oncoming danger. 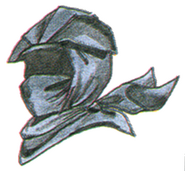