The Black Chocobo is a dark-elemental Eidolon that appears in Final Fantasy Dimensions II. The signet is available for Maina and automatically comes equipped to her by default when she joins the party in Chapter 4-1.

The Black Chocobo's signet provides Maina with a decent boost in her speed stat, and provides other balanced amounts for her remaining stats. It teaches Maina Haste abilities, which can support the party in battle by increasing their speed stat, however it pales in comparison to group variants already available, such as Aemo's Marching Song. Due to its lower stats, its passive to allow Maina to negate the darkness status is somewhat redundant to use. The Black Chocobo signet is considerably weak and is easily replaceable by signets immediately available after Maina joins the party.

Similar to its other appearances in the series, the Black Chocobo is a purple variant of the recurring Chocobo creature. The artwork depicts the chocobo with an angry expression on its face. As the signet evolves, the Black Chocobo's hue of purple darkens and it becomes enveloped with sparks of lightning.

The Black Chocobo's summon attack is Choco Meteor, which deals five small dark-elemental attacks to a random enemy. The Black Chocobo requires 2 bars from the Summon Gauge to use.

Maina learns the following abilities from the Black Chocobo:

In the original free-to-play versions of the game, the Black Chocobo could only be obtained by completing the "Found You Black Chocobo!" event quest-line in Final Fantasy Legends: Toki no Suishō. The signet would later become a limited-time purchase from the Babil Tower exchange shop, however it was eventually removed. It taught Fast Drive abilities and could be equipped by any party member. 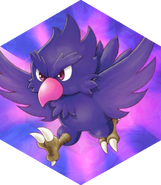 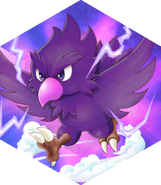 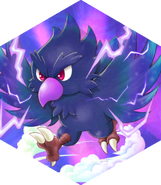 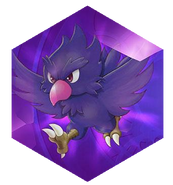 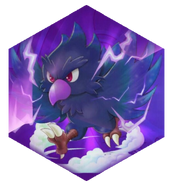