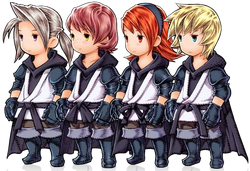 The Black Belt (空手家, Karateka?), also known as Karateka, is a Job class in Final Fantasy III. It is gained from the Water Crystal in the Famicom version of the game, while it is gained from the Earth Crystal in the 3D versions. Black Belts are masters of combat, able to use only their fists for massive damage. They are capable of linking their mind and body to store energy for an upcoming strike. Black Belt is considered to be a powered up version of the Monk job and one of the most powerful jobs in the game, dealing over 9999 damage even in the back row. Raising the Job Level of a Black Belt will raise his/her bare handed attack by 2, while Leveling up will boost the barehanded attack by 4.

Just like the NES version, Boost will increase the Black Belt's power. The first use will double the next attack, a second use causes the damage to triple. However, if Boost is used 3 times in succession, it overloads, cancelling the charge and cutting the Black Belt's current HP in half.

Black Belt appears as a job in Pictlogica Final Fantasy.

Retrieved from "https://finalfantasy.fandom.com/wiki/Black_Belt_(Final_Fantasy_III)?oldid=2118037"
Community content is available under CC-BY-SA unless otherwise noted.