Edit
watch 17:56
World of Final Fantasy: Bismarck Boss Fight
Do you like this video?
Play Sound

This great white whale rules the seas. Its foamy blast taps the power of water.

Bismarck (ビスマルク, Bisumaruku?), also called Bismark, is a recurring creature in the Final Fantasy series, mostly appearing as a summoned monster in the form of an aquatic creature resembling a whale.

Its summon ability, Breach Blast (also called Sea Song), deals Water-elemental damage to all opponents. Its Spell Power is 58, costs 50 MP to summon, and it is unblockable. As a magicite, it teaches Fire (x20), Blizzard (x20), Thunder (x20) and Raise (x2). At level up, it provides a +2 boost to Strength.

Though Bismarck does not appear as a summon, it is the name of a server and a Pteraketos-type Notorious Monster appearing as the final boss of the Final Fantasy XI: Chains of Promathia branch of the Voidwatch quest line. It is fought in Bibiki Bay, and was the debut of the Pterketos family.

Bismarck's duty appears to be the slow and painstaking reshaping of the land through water erosion. This is likely the reason for its aggressive defense of the waters it inhabits.

Bismarck is a fal'Cie that protects the waters and living creatures in the Sulyya Springs. It is seen as a bubbling discrepancy in the water. If it is examined, a cut scene displays and several platforms with enemies and treasure spheres rise out of the water.

Bismarck's model exists on the disc as dummied content, but never appears in the actual game.

Bismarck appears in the Final Fantasy XIV: Heavensward expansion, as the Primal worshiped by the Vanu Vanu tribe, also known as "The White." Bismarck has been reimagined as a "sky-whale" capable of flight with a number of wing-like fins covered in feathers, as well as no visible eyes, and a more ferocious mouth. Accordingly, the boss fight takes place at high-altitudes in "The Limitless Blue".

In Final Fantasy XIV: Shadowbringers, there is another Bismarck in The First. This Bismarck is an aquatic fae that had been slumbering in the Source, the great lake in Lakeland, for so long that he was mistaken for an island.

Bismarck is a whale in the Windows and Royal Editions. The party can encounter it when sailing on the royal vessel. It is a whale with a horn like a narwhal's, and runes across its body like those seen on havens.

Bismarck is a water-elemental Eidolon. It can be obtained as a signet for Parai to equip by doing the "Parai's Spacetime" main quest on the Day of Reckoning. The summon teaches the Water Spout abilities to Parai.

Bismarck is a Water-elemental esper. From time to time, players may encounter Bismarck in battle. Defeating Bismarck will grant players the Bismarck I summon stone, which allows Bismarck to be summoned into battle. When summoned, Bismarck uses the skill, Breach Blast. 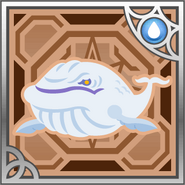 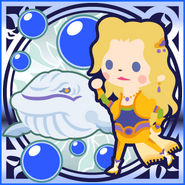 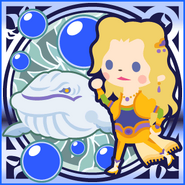 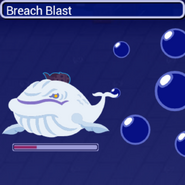 Bismarck is a boss and an Esper as part of the magicite system. The summon is a rank 3 water-elemental magicite and players must first defeat Bismarck (Savage) in the first water magicite dungeon in order to obtain it.

When Bismarck is summoned into battle it will cast Ultra Breach Blast, which deals water-elemental damage to all enemies and grants a barrier to avoid a single fire-elemental attack to all party members.

Bismarck also has a chance of using the following abilities after being summoned into battle:

Bismarck appears as an ability card.

Bismarck are a type of Mirage from the Sharqual group. They can be transfigured from a Mega Sharqual or Mega Nightsqual with a Bismarck Memento.

Bismarck is a Water element card, and has six cards under his name.

Bismarck makes an appearance as a summon. The Soil Charge Triad needed to summon Bismarck is:

Followed by saying: "Roar! I summon you! Bismarck!"

A raw model of Bismarck for Final Fantasy XIV.