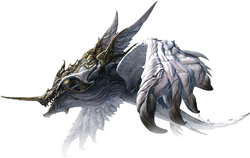 Bismarck (ビスマルク, Bisumaruku?) is the Primal of the Vanu Vanu beast-tribe in the expansion for Final Fantasy XIV.

Ruler of the clouds, worshipped by the Vanu Vanu.
Folklore tells of a legendary white whale said to swim in the Sea of Clouds as if they were the waters of the Rhotano.
According to Vanu legend, however, Bismarck led their ancestors to the floating islands. With waves of fury he purges his domain of those who would do his followers harm.

Bismarck was summoned by the Vunda tribe of Vanu Vanu. Bismarck later appeared while under attacked by Garleans, devouring a small island that contained the key to Azys Lla.

A raw model of Bismarck for Final Fantasy XIV.

Bismarck as seen in Heavensward benchmark video.
Add a photo to this gallery

Retrieved from "https://finalfantasy.fandom.com/wiki/Bismarck_(Final_Fantasy_XIV)?oldid=2354142"
Community content is available under CC-BY-SA unless otherwise noted.