Biran Ronso is a boss in Final Fantasy X. He fights alongside Yenke against Kimahri. The duo's stats depend on Kimahri's and they use various Ronso Rage abilities, allowing the player to copy them with Lancet after witnessing the duo use them first.

The battle theme is "Servants of the Mountain", the theme of Mt. Gagazet, rather than any of the usual battle themes.

Biran and Yenke's HP, Strength, Magic and Agility stats depend on Kimahri's stats.

Biran's HP is then determined as HP Value x 8.

His Magic is half of Yenke's and his Agility is Kimahri's Agility -4.

Biran automatically blocks attacks on Yenke with Guard when they are together, which temporarily increases his Defense to 254, and casts Mighty Guard once when below 25% HP, buffing both himself and Yenke. Otherwise, he alternates between using Thunder and Blizzard, with Bulldoze used in between them. Bulldoze switches Biran's row position from front to back and vice-versa. If one has used it but not the other, the Guard status means nothing and Kimahri's attacks will do full damage. Mighty Guard will also not target Yenke when separated.

During this battle, Kimahri can learn up to eight Ronso Rage techniques, including Thrust Kick, Doom, and Self-Destruct from Biran. Defeating Yenke first causes Biran to cast Berserk on himself, preventing Kimahri from learning Mighty Guard if he has not used it yet. Defeating Biran first will cause Yenke to use Haste on himself. If Doom is used on either Biran or Yenke, it will take 20 turns to take effect.

Physical attacks are more effective when Biran and Yenke are separated. Lancet or Hi-Potions can be used to heal. The player should use Aqua Breath when Biran and Yenke are together and Fire Breath when they are separate. It is suggested not to attack just one of them, and allow both of them to use their rages before defeating either if the player still needs to learn them.

If Kimahri knows Steal (ability from Rikku's path), he can steal useful Lv. 3 Key Spheres from Biran and Yenke, at least five of each. If an armor is customized with the Master Thief ability (using the Pendulums obtained in Remiem Temple), each successful steal will give two Lv. 3 Key Spheres. 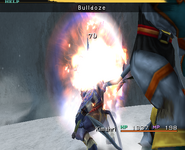