Biran Ronso is a non-player character in Final Fantasy X. He is a Ronso warrior, born on Mt. Gagazet. He is friends with Yenke and on antagonistic terms with Kimahri due to believing that Ronso who are "small and weak" do not deserve respect. He is a hero of the Ronso tribe for his strength and battle prowess, and is faced as a boss in Final Fantasy X.

Biran is a tall muscular blond Ronso. In contrast to many of his brethren, his fur is more gray than blue. He wears the typical Ronso tribe attire of leather armor on torso, arms and legs, as well as a loincloth.

Biran is a proud Ronso warrior who respects those with strength to match his own and those who he believes deserve respect. His victory over Kimahri in a battle left tension between the two, due to Kimahri not wanting to accept defeat. Biran broke Kimahri's horn and has behaved antagonistically toward Kimahri thereafter, deriding him for being hornless. When Kimahri finally defeats him and Yenke, Biran honorably accepts defeat and begins respecting Kimahri again.

Biran is known as a hero, most likely for being a great warrior. After defeating Kimahri in battle, he yet refused to admit Biran had beaten him, and so Biran broke his horn bringing great shame on Kimahri.

Ten years later Biran and his companion, Yenke, meet Kimahri in Luca where they taunt and fight him, but with no resolve, because Kimahri is interrupted when he learns of Yuna's kidnapping. When fiends attack the blitzball finals, Yenke and Biran are among the heroes fighting them off. Later on, the duo meets Kimahri and company along the Moonflow after bullying Wantz and warn Kimahri about summoners disappearing.

At Mt. Gagazet, after Maester Kelk allows Yuna's party to pass, Biran and Yenke let them pass except for Kimahri due to Kimahri being a disgraced Ronso. If Kimahri were to be allowed to climb the mountain, he must prove his strength, and accepts the challenge against Biran and Yenke. Kimahri wins, regaining his honor as a Ronso. Biran, Yenke, Kelk, and all the other Ronso promise to fight off anyone pursuing Yuna and her guardians on the mountain. When Seymour Guado follows them, he is attacked by the Ronso, and goes on to slaughter any Ronso in his path.

If Yuna says something favorable to a Ronso, he remarks "Biran and Yenke rejoice in Farplane". Even though some of the Ronso are gone, they are not forgotten.

Biran is fought on Mt. Gagazet alongside Yenke. Kimahri fights them alone. This is a chance for Kimahri to learn various Ronso Rages the player may have missed. The rival Ronso's stats depend on Kimahri's. 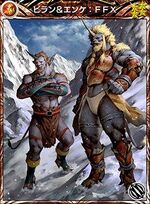