Cid Pollendina: Oh, shut up and help me remodel the Bikanel page!
Please expand this article into a full one. The following tasks need to be completed:

Bikanel is an island to the west of the Spira mainland in Final Fantasy X and Final Fantasy X-2. It is primarily a large, arid desert with an oasis, featuring palm trees and a drinkable water source. Many ruins and sand-swept campsites dot the landscape. The Al Bhed town Home is situated in the middle of the desert.

If one returns to the desert after visiting Home in Final Fantasy X, the player can find two Al Bhed men blocking the way. If one tries to pass they'll simply engage into conversation with each other, and the player explaining that there is nothing to find that way. In some International versions, it is possible to return to Home after acquiring the airship, but it results in a glitch.

The Sanubia Sands is the home of the Al Bhed and the cactuar species. Bikanel Island had hosted at least one large city in former times, most likely in the time around the Machina War. As the signs on the ruins are all in the Al Bhed language, it seems the former city was already an Al Bhed city. According to Rikku, that city was destroyed by Sin, which is why the Al Bhed were scattered throughout Spira. Sometime prior to Tidus's arrival, Cid has reunited his people and built a new Al Bhed city in secret, known as Home.

Tidus awakes on the oasis of the desert after being whisked away by Sin from beneath Lake Macalania. He battles a Zu alone until Auron and Lulu help him defeat the beast. They meet up with Wakka who is resting underneath a makeshift shelter. They find Kimahri sliding on the sand and lastly, they find Rikku on another makeshift shelter. Rikku reassures them that Yuna is at Home and takes them there on the promise they will not tell anyone about it, even telling Wakka not to glare. After they cross the vast desert, they arrive at Home, only to find it infested with fiends and under attack by Guado.

In the northeast of the desert, a sandstorm is raging over an area known as the Cactuar Nation. By locating the ten Cactuar Gatekeepers scattered throughout the desert, they will quell the storm and offer some prizes.

In the HD Remastered versions, the party can fight Dark Ifrit after offering help to a summoner in disguise as an Al Bhed woman. After the battle, the summoner tries to flee only to run into a Sandragora that devours him.

The Al Bhed are hard at work excavating the desert for machina. Yuna and her friends can assist if they choose to by getting a letter from Gippal in Djose Temple. The desert is divided into several expanses which the Al Bhed have mapped for safe digging: western, southern, northern, eastern, and central (the largest expanse, requiring a chocobo for safe travel). The party can find Al Bhed Primers, Sphere Break coins, parts for the Experiment, and other treasures from the excavation sites.

Nhadala requests the Gullwings visit the oasis since strange stuff have been washed up there lately. The Gullwings do so and obtain a sphere and are confronted by Logos and two Fem-Goons. They flee after being defeated by Yuna and friends, allowing the Gullwings to procure a syndicate uniform. If the party turns O'aka to the Al Bhed for his unpaid debt, he is found working in the Southern Expanse where the party can bring him to the airship.

The party visits the Cactuar Nation, where the leader of the cacti, Marnela, tells them of a fiend once sealed by her ancestors that has recently awakened, and asks the Gullwings to find the Ten Gatekeepers that can summon the Great Haboob, a magical barrier, to repel the attack. After the Gullwings find the ten gatekeepers, they stop the fiend, which attacks the excavation camp instead. The Gullwings head to the camp to defeat the fiend once and for all. Afterward, the Al Bhed have made food for them to celebrate. At the Cactuar Nation, The Al Bhed interpreter Benzo reveals that a cactus sprout had appeared in the place of Marnela, ready to grow as a new Marnela.

Bikanel Desert, also known as Sanubia Sands, is a large expansive desert that makes up the majority of Bikanel Island.

Home is an underground fortress and home of the Al Bhed hidden amid the Bikanel desert.

Cactuar Nation/Village is found in the middle of Bikanel Desert. It is home to a many cactuars and their matured form, the giant cacti.

Cactuar Hollow is a dungeon located in the Cactuar Nation in Bikanel.

Village of the Cactuars[] 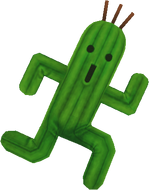 After gaining control of the Fahrenheit, the player can return to Bikanel Desert and find a rock with a picture of a cactuar. Each time the rock is examined the player will receive a clue to find one of the ten hidden cactuars in the desert. After finding one the player is challenged to a minigame where the goal is to sneak up on the cactuar within a time limit. While the cactuar has its back to the player the player can make their move, but when it is facing the player they must stay still.

A few Al Bhed Primers can be found normally, but if previous Primers were missed they may be found in certain areas around the desert.

In the International, PAL and HD Remaster versions, Dark Ifrit can be encountered here after the player has control of the airship. It can be encountered on Bikanel, near the entrance to where the Al Bhed Home was. The player must offer help to an Al Bhed woman, who is actually a summoner in disguise, claiming to have lost her child, and summons Dark Ifrit to attack the party.

After completing the Water We Doing Here? mission in Chapter 2, different events may occur at the Oasis.

Furthermore, the object that floats in the water is subject to further randomization.

The player can talk to the mother cacti in the area to receive clues to the Ten Gatekeepers all over Spira.

Sending a chocobo to Bikanel to look for treasures finds the following items (depending on the chocobo's level):

The Excavation minigame allows the player to search the Bikanel Desert for treasures hidden in the sands.

Can You Dig It?
This is not a compulsory mission, and is not required to complete the game.

Dig up the machina parts that Nhadala asked you to find in the desert and transport them safely to camp.

Water We Doing Here?
This is a compulsory mission required to complete the game.

Too late to say 'no' now- so it's off to check the Oasis for Nhadala. If anyone gets in your way hurt first, ask questions later!

The Cactuar Connection
This mission can be started as early as Chapter 3, but cannot be completed until Chapter 5.
This is not a compulsory mission and is not required to complete the game.

The Ten Gatekeepers have ventured into the world proper to train. Round them up and bring them home to the Cactuar Nation! Think you can unravel the Cactuar Mothers' clues and sniff them out?

The Last Cactuar
This is not a compulsory mission and is not required to complete the game.

Who'd have thought the last cactuar would be so close? Use the help of the nine gatekeepers you've already tracked down to bring that rascal home!

Showdown in the Sands
This is not a compulsory mission and is not required to complete the game.

The fiend that was ousted from the Cactuar Nation is raiding the Al Bhed camp! Wipe it out once and for all... Gullwings style.

The desert is safe, and the cactuars are doing great!

The desert fiend Angra Mainyu has been defeated, and considering the damage caused by the fiends, the Al Bhed are sure it is nothing compared to the Siege of Home two years ago.

To get Episode Complete in Bikanel, the player must fill the following criteria:

In Final Fantasy X-2, "Bikanel Desert" plays when in the desert.

Rikku introducing everyone to Sanubia Sands in Final Fantasy X.

The party traveling across Sanubia Sands in Final Fantasy X.