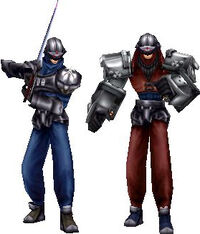 Template:See Also Biggs (ビッグス, Biggusu?) and Wedge (ウェッジ, Wejji?) are Non-Player Characters in Final Fantasy VIII. They are two incompetent Galbadian soldiers that are frequently encountered by Squall and his party. They serve as comic relief throughout the game.

Major Biggs and Lieutenant Wedge are first seen fixing the Communication Tower in Dollet so that Galbadia can broadcast their propaganda campaign. Wedge tells Biggs that a monster has been seen on the top of the tower, but Biggs ignores him, complaining that it is left to him to fix the tower. Wedge leaves Biggs to take a look around. When Squall, Zell and Selphie arrive at the top of the tower, Biggs finishes the repairs and the tower becomes operational.

When he spots Squall's party he orders Wedge to fight them, but when he realizes Wedge isn't here, Biggs fights the party himself. Wedge eventually appears, and an angry Biggs docks his wages for the next month. The battle is soon interrupted when Elvoret appears and knocks Biggs and Wedge away with its Storm Breath. After the party defeat Elvoret and exit the Communication Tower, Biggs programs an X-ATM092 to kill the party, before passing out.