Hard to believe an Esper's been found intact there, 1000 years after the War of the Magi...

Biggs (Vicks on the SNES) and Wedge are temporary playable characters in Final Fantasy VI. They are soldiers of the Gestahlian Empire who accompanied Terra on a Imperial attack on Narshe to retrieve a frozen esper.

Biggs and Wedge use the same sprites as the rank-and-file Imperial troopers, a brown uniform with a visored helmet, gloves, shoulderpads, and boots. They share a menu sprite, which shows a small amount of blond hair peeking out from under their helmets. In the FMV scenes for the PlayStation Final Fantasy Anthology release, one of the two is depicted as shorter and stockier.

Both are professional soldiers focused on their mission. Biggs is skeptical regarding the presence of the esper in Narshe and fearful of Terra due to rumors of her powers, derisively referring to her as a "witch". Wedge is more confident, reasoning their superiors would not have sent Terra with them if they did not trust their intelligence, and he reassures Biggs of Terra's obedience due to the Slave Crown controlling her thoughts. Of the two Wedge seems to be the senior officer, as he is usually the one to give orders to the other two.

Biggs, Wedge, and Terra were sent to Narshe to investigate the rumors of a frozen esper the townsfolk had dug up in a new mine shaft. The two put Terra on point as they attacked the town and fought through Narshe's guards to reach the mines. Biggs bashed down a gate blocking their way, but the guards sicced a monster called Ymir on them. Biggs recognized it as a "lightning whelk" that absorbs lightning and stores the energy in its shell. The trio used this knowledge to avoid striking the monster's shell and destroyed it.

In the cavern beyond the three discovered the frozen esper that began to glow as they approached it, particularly reacting to Terra's presence. As Biggs and Wedge looked around in confusion, Wedge and then Biggs vanished in flashes of light, killed by the esper's power.[1]

Biggs and Wedge's job is listed as "Soldier". As temporary characters they cannot have their equipment changed and they have no unique command abilities. They have the Magitek command in place of the Attack command since they are riding Magitek armor. They begin at Level 1 and are both equipped with a Mythril Sword, Buckler, Leather Cap, and Leather Armor.

Because Terra has access to the group-hitting Magitek attack Bio Blast, it is not difficult for her to fight through the prologue alone. Killing the two off with Terra's Fire spell will let her level up faster from fighting alone. Conversely, if the player is attempting a low-level run, they will want to use Fire to kill Terra herself so only Biggs and Wedge will gain levels.

Biggs and Wedge make a cameo as tutors from the in-game manuals. Biggs jokes about his name being mistranslated as Vicks, but assures the player that it is Biggs.

No. 031: A soldier of the Gestahlian Empire who appears in a tale of humans and espers, told in a distant world. Under orders from the Emperor, a despot bent on world domination, he ventures to the mining town of Narshe with his comrade Wedge to retrieve a frozen esper. Accompanying them is Terra, a young girl who, despite her prodigious magical powers, is enslaved to the Empire by the binding crown on her head. By her magicks and the formidable Magitek armor, they dispatch the defenses of Narshe and come face-to-face with the esper they seek.
No. 032: A soldier of the Gestahlian Empire whose story is told in a tale of espers and humans. Together with his comrade Wedge and a mysterious girl named Terra possessed of prodigious magical powers, he embarks on a mission to the mining town of Narshe in search of a frozen esper. The band withstands resistance from the Narshe town guard, and Ymir, a monster dwelling in the mines, to finally arrive at the resting place of the esper Valigarmanda. In an instant, however, they are bathed in unholy light and whisked away, never to be seen again.
Entries for different versions of Biggs.

Biggs is a vision obtainable through summoning. A 2-3★ standard summon, his job is listed as Imperial. His Trust Master Reward is the Blizzard Beam special ability and his awakening materials are Esper Shard x10, Allure Powder x3, Esper Cryst x1 and Quality Parts x1.

Biggs's stats at his highest levels are as follows, with no passive abilities taken into account*(Actual stats may be higher):

Wedge appears as a vision obtainable through summoning. A 2-3★ standard summon, his job is listed as Imperial. His Trust Master Reward is the Fire Beam special ability and his awakening materials are Esper Shard x10, Allure Powder x3, Esper Cryst x1 and Quality Parts x1.

Wedge's stats at his highest levels are as follows, with no passive abilities taken into account*(Actual stats may be higher):

The two soldiers called Biggs and Wedge appear in Chrono Trigger, as employees in Norstein Bekkler's Tent of Horrors. A V-Jump issue in Japan humorously states that after Valigarmanda made them disappear in Final Fantasy VI, they ended up in the Chrono Trigger dimension and were found by Norstein, who gave them their new jobs.[2] Like in Final Fantasy VI, Biggs was called Vicks in the SNES and PlayStation versions, but this was corrected in the Nintendo DS version.

This is the first chronological appearance of Biggs and Wedge in the Final Fantasy series and would go on to become recurring names appearing in several games for different characters. The duo are a reference to Star Wars, specifically Luke Skywalker's wingmen during his trench run to destroy the first Death Star in A New Hope. Possibly reflecting the film's events, Wedge is dispatched before Biggs (though Wedge was not killed in A New Hope, merely forced to disengage).

The FMV for Anthology shows one of the two as shorter and stockier than the other. This is likely intended to be Wedge, as later Final Fantasy titles tend to depict Wedge as being shorter. Later appearances depict Biggs as the one holding command or seniority over Wedge, a reversal of their dynamic in Final Fantasy VI where Wedge is more authoritative.

Early screenshots of the game's Japanese version call Biggs, レオ (Reo?), and Wedge, バナン (Banan?), respectively, the Japanese names of Leo and Banon. It is possible the names were conceived before they were given to the actual Leo and Banon, or they were used as placeholder names for the soldiers in the screenshots. In an early draft of the Opera "Maria and Draco" sequence, Biggs and Wedge disrupted the opera instead of Ultros. The party would have fought the two in the rafters in a timed battle where the two tried to push the weight off the wedge of the screen and the party had to defeat them before they succeeded.[3]

On April 11, 2013, Producer's Letter Live for Final Fantasy XIV: A Realm Reborn, Producer Naoki Yoshida (Yoshi-P) showed a video to spotlight the Magitech Armor in the game. The video was heavily inspired by, and designed to evoke, the opening scene of Final Fantasy VI, and featured characters recognizable as Terra Branford, Biggs, and Wedge. 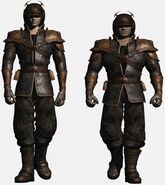 CG render of Biggs and Wedge from Anthologies.

Ted Woolsey, the game's original translator, translated Biggs' name as Vicks, which was corrected to Biggs in all subsequent re-releases, and he is referred to as Biggs in Japanese materials that use English text. However his Japanese name would not correspond to the pronunciation for "Biggs". Biggs' name is given as ビックス (Bikkusu?) in Japanese, while future appearances of Biggs in other games use the correct transliteration for "Biggs", ビッグス (Biggusu?). V sounds are not native to Japanese, so often times B sounds are used as substitutes, which is likely why Woolsey translated the name as he did. A more literal, direct translation of the Final Fantasy VI spelling would be "Bikks".