Stellar artwork celebrates the birth of the universe.

Description of the "Big Bang" decal in Final Fantasy XV

Big Bang is an artwork by Yoshitaka Amano for Final Fantasy XV. It depicts various characters from the mythos of Eos. It was made into a 3D animation by Square Enix.

The player party—Noctis Lucis Caelum, Gladiolus Amicitia, Ignis Scientia and Prompto Argentum—ride the Regalia on top of a "wave" bursting from the Citadel imposed on a red moon or sun. The various creatures appear to be mostly daemons, some of which appear as enemies in the game, like Bomb and Arachne. Ardyn Izunia appears at the bottom with a demonic face with horns, rather than how he appears in the game. The blonde-haired woman in the arms of an armor-clad winged warrior could be an Oracle and Bahamut. On the right, some of the figures resemble the Astrals Titan, Leviathan and Shiva. The name of the artwork, Big Bang, implies it would depict the creation of the world. 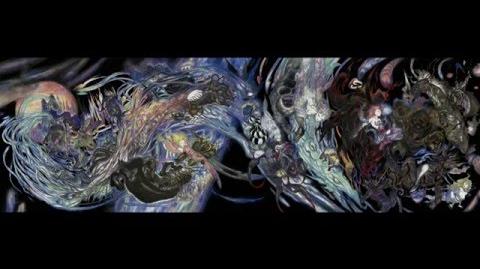 A 3D animation of the artwork was created for promotional footage. The music is called "Somnus Ultima", and is the ending music for Final Fantasy XV. "Big Bang" was also made into a PlayStation 4 theme available for those who got the digital deluxe version. The artwork is also available as a skin for the player's car in Final Fantasy XV as a reward from Totomostro.

An "extended" version of the artwork was shown at the Final Fantasy 30th Anniversary exhibition in January 2018. It shows a black-haired woman riding on a white horse that has blue mane and tail and breathes smoke, a red-clad character who appears to be Gilgamesh, and black dragons and other smaller creatures.[1]

Big Bang skin for the Regalia.

[view · edit · purge]The Big Bang was the event that led to the formation of the universe, according to the prevailing cosmological theory of the universe's early development.